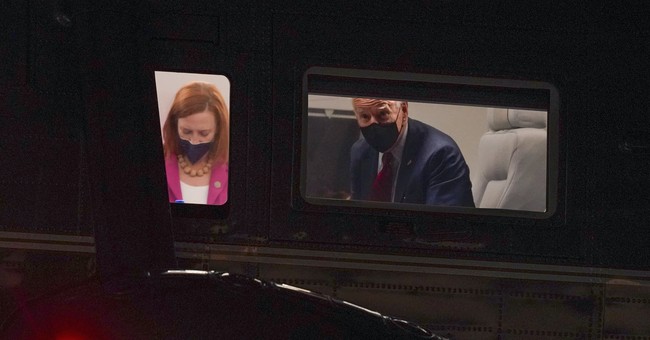 We reported yesterday on how President Biden appeared to confess to an abuse of power in remarks he made during a disturbing speech in Elk Grove, Illinois, on the supposed “success” of his coronavirus vaccine workplace mandates, where he also bragged about workers who were fired over the mandates.

For those who missed it, Biden was talking about how hospital emergency rooms were allegedly being so overrun with unvaccinated COVID patients that he actually called the ER desk at one on behalf of a friend whose “significant other” was sick but who allegedly was not being prioritized by the hospital:

“Last night, I was on the telephone with a person at an emergency hospital ward in Pennsylvania because a good friend had called, and he had rushed his significant other to the emergency room because this woman was having trouble breathing, had a high fever, and could not catch her breath,” Biden said during a speech in Illinois promoting COVID-19 vaccine mandates for businesses. “They got her into the hospital. The waiting room was so crowded, things were so backed up they couldn’t even get her to be seen initially. So, because I knew this person, I called. I called the desk receiving nurse and asked what the situation was.”

“To make long story short, it took a while because all of the – not all – the vast majority of the emergency rooms and docs were occupied taking care of COVID patients,” Biden added. “I bet every one of you can name somebody who got sent to the hospital with something other than COVID and couldn’t get it taken care of.”

In my view, that’s about as close as it gets to admitting you used your extremely significant clout as President of the United States to get the hospital to put your friend’s significant other ahead of others in line to be seen at the ER. But when White House press secretary Jen Psaki was asked today about Biden’s admission by Fox News reporter Peter Doocy, her spin on it was that he was just checking on his friend’s significant other out of concern, and was “not trying” to help them be able to cut in line:

What utter horse crap. And believe me, I’m not someone who curses a lot but if I could use the curse word for “crap” here, I would.

This is insulting beyond belief and absolutely no one should buy it. No one.

The people who are going to know best as to their loved one’s condition are those closest to them — in this case, Biden’s friend, who naturally would be able to give an update on how their loved one is doing, if they were being well-taken care of, etc. There would simply be no other reason for the leader of the free world to call the front desk nurse at the ER simply to supposedly express “concern” for a friend’s significant other unless there was another purpose for the call.

And imagine being the nurse being told that President Joe Biden is on the phone and wants to ask about a patient’s status. What do you think that nurse is going to do? He or she is going to jump up and alert other hospital staffers/nurses/doctors immediately and things obviously would get rolling quickly for the patient in question at that point, with the red carpet being rolled out and the whole nine yards.

Joe Biden has been in politics for decades, many of them in leadership roles in the Senate and then obviously as Vice President. He knows well how the power thing works.

This story and the fallout from it reminds me of how it was revealed earlier this year that family members of disgraced ex-NY Gov. Andrew Cuomo (D), including his brother and CNN host Chris Cuomo, were given special treatment during the pandemic, in terms of COVID testing and treatment, and later the vaccine. Biden and Psaki should just come clean on this and admit he shouldn’t have used his power as POTUS to call in a favor for a friend, but they won’t, because they are desperate to keep the narrative about Joe Biden just being a common man who is concerned about the well-being of his fellow Americans alive.

In reality, he’s only concerned about his political legacy and capitalizing on the Biden name and power to get what he wants. Considering the desperate lengths he went to in order to hide his son Hunter’s shady business dealings with foreign entities, I guess we shouldn’t be surprised that he’d bully a hospital, too.