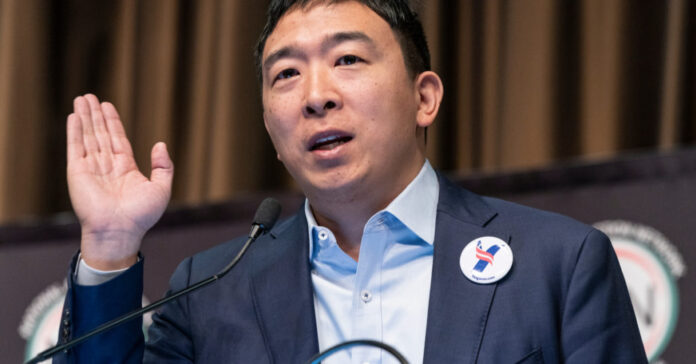 The Democratic Party has had no lack of public relations issues in recent years, and it hasn’t been helped by the ripping of the party by far-leftist and more centric Democrats. The advent of the social media star-politician hybrid also hasn’t done much for the divisive and iconically selfish party.

As much as Democrats liked to fault former President Donald Trump for taking his grievances to Twitter (and boy did they hate it) they also recognized that much, like former President Ronald Reagan, he had a point about going straight to the American people with his thoughts, opinions (blame, frustrations, roasts), etc.

The most recent among those to get fed up with the DNC is former presidential candidate Andrew Yang, who said on Monday that he is leaving the party and is now officially registered as an Independent voter.

Yang, who is a technology entrepreneur, made waves, and quite a few headlines, when he launched his bid for the Democratic presidential nomination and what ended up being an unsuccessful campaign for both president and, later, New York City mayor. However, this didn’t keep people’s interest from being captured, and he has remained in the peripheral vision of voters.

The failed candidate published a blog post on Monday saying he is “breaking up” with the Democratic Party: “I changed my voting registration from ‘Democrat’ to ‘Independent’ today. It was a strangely emotional experience,” Yang wrote.

The New York former Democrat said that he is confident that no longer being part of the DNC is the right thing, “So why do I feel in my heart that this is the right move?” Yang said. “While it was simply a small piece of paperwork, I genuinely felt a shift in my mindset as soon as I signed it.”

He went on to cite the “polarization” as one of the reasons he is stepping away from the party and said that he is looking to fix the system rather than trying to be part of it, saying that his “goal is to do as much as I can to advance our society.”

According to Yang, there are dedicated public servants working for the American people, but the system is “stuck” partially because of the polarization and things are only getting worse:

“Many of the people I know are doing all of the good they can – but their impact is constrained. Now that I’m not a member of one party or another, I feel like I can be even more honest about both the system and the people in it.”

According to the Daily Wire, Yang first registered as a Democrat in 1995 at 20 and voted for former President Bill Clinton’s re-election campaign, sticking with his decision through his 20s.

“It was a no-brainer for me. I went to a college that was very liberal. I lived in New York City. Everyone around me was a Democrat.”

However, lest we feel the common ground swell beneath our feet, Yang also noted that “When Trump won, I was surprised and took it as a red flag and call to action.”

And what did he run on? “I spent several years making the case for what I believed was the major policy that could address it – Universal Basic Income,” Yang wrote, citing his campaign promise of $1000 universal basic income to every American adult.

So Yang is correct, there is too much division. But division over a crucial issue like work for money is division worth having. So our question to Yang remains this: when Universal Basic Income eventually morphs into universal basic workload (which it, logically and historically has to), will there be an option to step outside that system and decide when, where and how much you work? Or since you’ll automatically receive the funds, will we all be required to “do our part”?

So, he’s right, but mostly he’s wrong. Take what you can, but for goodness sake leave the socialism on your way out.