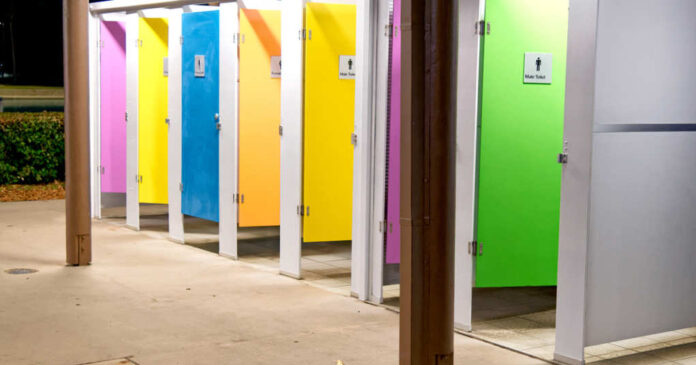 Amnesty for illegal immigrants via a 3.5 trillion-dollar reconciliation bill is bound to be a touchy subject. As Krysten Sinema (D-AZ) found out Sunday, young Democrats will not stand for it. Chasing her into a bathroom with cries of “We need to hold you accountable!” and “We can get you out of office if you don’t support what you promised us” these people have violated the safety and sanctity of Arizona State University (where she also serves as a professor).

Challenging the very safety these same people claim, ‘white men destroy’ the hypocrisy is jaw-dropping. As only the second LGTBQ member of the Senate, you would think Democrats of all parts of the party would love her unconditionally.

The cornerstone of this protest following her speaking engagement is her ability to block a Democrat-controlled Senate from getting the full 50 votes it needs. Joined by Joe Manchin (D-WV), these two can easily undermine the new social framework being pushed by President Biden.

These two DINOS (a take-off from President Trump’s term RINO- Republican In Name Only) are some of the only Democrats who truly get what America stands for. This is not a Nation of free passes because you didn’t get caught.

Yet if President Biden, ‘The Squad’, and the rest of the Democratic party have their way your wages could be dictated by what the Government sees as a ‘reasonable wage’. Medical decisions would be largely out of your control (as evidenced by the attempts to restrict access for those without vaccination or a clean COVID test). Your free speech stands to become censored to go with the flow of the Government.

Across the globe we are seeing the results of these efforts in whole or in part in Australia & France; the results are (predictably) less than desirable. People who stand up for their rights are beaten by police or the military. They are locked up and given no access to due process. Is that what America is about? Not at all. It is the very tyranny America has been against since its inception, and if it was any other country treating its people like this America would have already sent in the Marines to obliterate their government.

Senators Sinema and Manchin might wear the Democrat title for their Senate seats but make no mistake. They know how important it is to keep immigration on the right side of things, and now they are paying the price for it. Senator Manchin has also been being harassed as well, as protesters who want him to go with the rest of the party paddleboard up to his yacht docked in DC daily to tell him so.

These attacks are beyond reasonable, and they showcase just how unstable the Democratic party has become. They turn on their own party members and refuse to listen to any information that isn’t proclaimed as gospel by AOC or President Biden.

If it even slightly goes against their predetermined views, they won’t stop at just disparaging you, they will attack every ounce of your character, and come to your home. Or in this case your bathroom. Where does it end? More importantly, when will the Democratic party stand up and tell their puppets this is wrong?