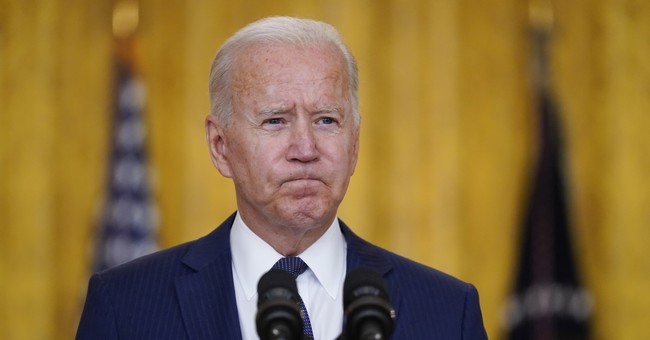 During his visit to Illinois today, Joe Biden recounted a story. With Biden being Biden, it’s anyone’s guess if the story was true.

But if it were true, it surely sounds like he was actually confessing to an abuse of power, even if he didn’t realize that was what he was doing.

Biden told a story about the significant other of a friend having trouble getting seen by a doctor at a hospital for an emergency situation, allegedly because the “waiting room was so crowded.”

“Last night, I was on the telephone with a person at an emergency hospital ward in Pennsylvania because a good friend had called, and he had rushed his significant other to the emergency room because this woman was having trouble breathing, had a high fever, and could not catch her breath,” Biden said during a speech in Illinois promoting COVID-19 vaccine mandates for businesses. “They got her into the hospital. The waiting room was so crowded, things were so backed up they couldn’t even get her to be seen initially. So, because I knew this person, I called. I called the desk receiving nurse and asked what the situation was.”

“To make long story short, it took a while because all of the – not all – the vast majority of the emergency rooms and docs were occupied taking care of COVID patients,” Biden added. “I bet every one of you can name somebody who got sent to the hospital with something other than COVID and couldn’t get it taken care of.”

Biden said he “wasn’t complaining” because doctors and nurses were “getting the living hell kicked out of them, sometimes physically.”

Now, Biden is not a very bright guy. He’s telling this story to push the “COVID is overwhelming the hospitals” talking point. His contention that I bet everyone of you can name someone sent to the hospital with something other than COVID who couldn’t get taken care of is just not true, but again, it’s a Biden exaggeration.

But he doesn’t realize in doing so that he’s confessing to an abuse of power if this story is true. First, I doubt if someone was really having trouble breathing that that person wouldn’t jump ahead on the list of people to be seen. But if it is true, it sounds like he just used his power to jump his friend’s significant other over other people.

That’s a huge problem and completely improper if he did that. It’s the kind of thing that Gov. Andrew Cuomo is being investigated by the New York Attorney General for right now — in having his friends moved ahead of the line for COVID testing.

It’s an abuse of the public trust as well. And if Biden is willing to do that in such a situation and not even understand that it’s wrong, then you have to also wonder what else he is doing.

We already know that Joe Biden has some questionable ethics. We saw prior actions in regard to his son Hunter where he met with Hunter’s business associates when he, Joe Biden, was Vice President, in the Vice President’s residence — a seeming situation of influence peddling. He also flew his son to China on Air Force Two so that he could meet with a potential business partner. We’ve seen that Joe Biden — even today — doesn’t seem to understand the concept that the White House shouldn’t be acting in any capacity on behalf of his son, Hunter. Yet the White House has confessed to being intimately involved in the “ethics deal”surrounding his art show, claiming neither he nor Joe will be made aware of who the buyers of his art might be. Their involvement is just fundamentally ethically wrong.

While President Donald Trump was pursued for a “perfect phone call” by Democrats alleging abuse of power, will anyone even object to this or call this out? I doubt it. Media will just skip right over it and move merrily along because Biden has the magical protective “D” after his name.