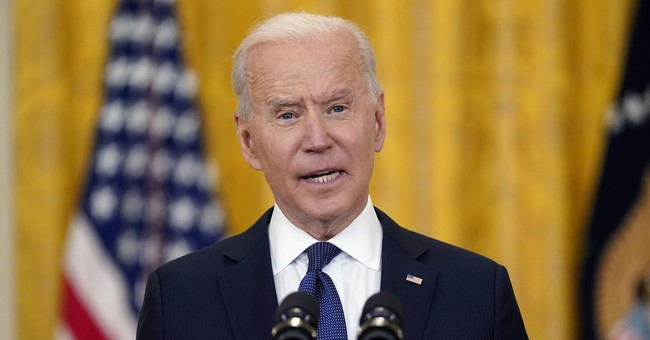 The president appeared in public today, and that always means the delivery of some really good material. Sure enough, Joe Biden did not disappoint in a rambling mess of a speech he gave on the economy. In it, he slammed the unvaccinated. Worse, he actually bragged about getting people fired, claiming that it helped raise vaccination rates by subtraction.

When’s the last time you heard a president brag about putting Americans out of a job? Yet, here we are.

That’s some serious Democrat logic on display. The only reason the “rate” of vaccination went up among workers at United Airlines is that those that were fired or laid off are no longer there. That’s like cutting off your legs and then bragging that all of your extremities now have thumbs. You still needed those legs. Businesses need employees. More importantly, employees need to make a living. Everything about what Biden says here is not only nonsensical, it’s morally repulsive. Putting people on the street over a vaccine mandate that isn’t even necessary is some sick stuff.

And on the topic of necessity, Biden once again repeated the ridiculous contention that the unvaccinated put people at risk.

Again, everyone spreads COVID. That’s not my opinion. That’s straight from the CDC. Therefore, there is no additional risk coming from the unvaccinated in regards to the vaccinated nor the economy at large. Biden makes several claims that are just outright false to make that case, though. For example, he claims that a lack of COVID restrictions somehow suppresses economic activity because people are fearful to engage in commerce. Yet, one look at Florida’s current economy shows that’s ludicrous to suggest. Compare the restaurant industry in New York to Miami and the latter is booming while the former is struggling under the vaccine passport regime.

Biden also asserted that the unvaccinated are overrunning hospitals and stopping people with heart attacks from receiving treatment. Again, I can find no evidence of that outside of a few sparse anecdotes, some of which have already been proven false. Will the fact-checkers chime in? You can bet they won’t.

Of course, it wouldn’t be a Biden speech without him melting down while trying to say people’s names.

When will his handlers accept that this man is not capable of listing names and titles? He even managed to misgender Lori Lightfoot, calling her “Mr. Mayor.” The entire speech ranged from comical to disturbing. The flippancy with which Biden talks about people losing their jobs for a mandate that serves no purpose is jarring to see from a president. Where’s the empathy we are told he’s so good at having?

The country is in such an odd place. I’m not sure how much longer this can go on without causing irreparable division. Perhaps we’ve already passed that point, though?