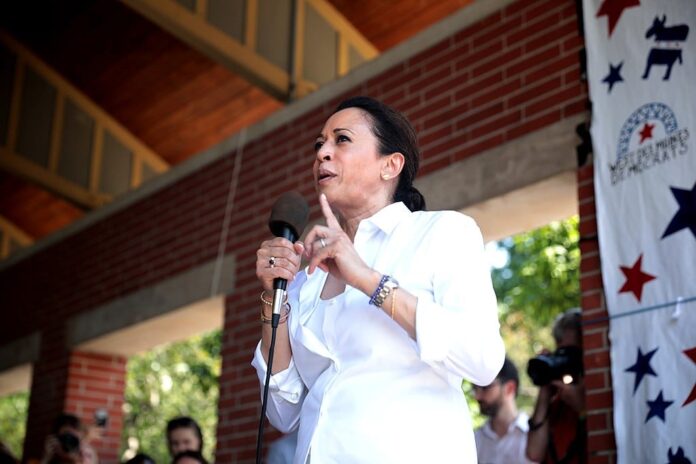 The migrant crisis may be the single most important issue going on in our country right now. And, our president cannot be bothered to deal with it.

Yet, he just handed the migrant crisis off to Kamala Harris.

This is surely not a job for the Vice President. Yet, he says, “I can think of nobody who is better qualified.”

Great. Biden has essentially admitted that he’s incapable of doing the job as president.

The migrant crisis will take a lot of hard work – and if handled badly, will look poorly on the administration. By handing it off to Harris, Biden gets to wash his hands of it. When the proverbial feces hits the fan, Biden won’t have to deal with it. This protects his ratings and distances himself.

Kamala Harris has already addressed the fact that it’s a “challenging situation.” She plans on looking at the “root causes” of the migration crisis.

This should be fun. Everyone already knows the root causes. One of the first things that Biden did when entering office was sign executive orders to allow more migrants into the country. He announced amnesty and pathways to citizenship for anyone who could show that they were in the country by January 1.

Migrants began flooding as soon as they heard the announcement – and they haven’t stopped. Better late than never, right?

Of course, Kamala Harris isn’t going to identify Joe Biden as the root cause. Though, she may save it in her back pocket later on – such as when she wants to impeach him for being mentally unstable or for when she decides to run for president after this term.

Harris is looking to identify what’s going on with the Central American countries to find out why they’re migrating at such a rapid base to our southern border. Meanwhile, she says that she wants to support “shared prosperity in the region.” Shared prosperity? That sounds like it’s going to cost the United States millions if not billions of dollars.

The migrant issue is only getting worse – and much of that has to do with mixed messaging. Families, unattended minors, and more have been reaching the southern border. Since Inauguration Day, the numbers have been on the rose. Much of it has to do with people assuming they can be American citizens if they cross the border, legally or otherwise.

Biden and his Department of Homeland Security officials have told Americans that the border is closed. The problem is that they’re not necessarily telling the rest of the world that. Meanwhile, migrants continue to get released into the U.S. – and many are even being put up at hotels.

Imagine that – you cross into a country illegally and then, you’re told you get to stay. You’re put up in a hotel instead of being charged with a crime. Liberals argue that there is no crime. Yet, breaking into a country against immigration law is absolutely illegal.

Now, we have to sit back and watch Kamala Harris “fix” the problem while Biden sits back and relaxes in the Oval Office. It’s disgusting to see the president choosing not to deal with such a big problem himself. But we knew a year ago that Joe Biden wasn’t going to be a good president.

Let’s hope that the bleeding-heart liberal VP can actually fix the problem without inviting millions of migrants to take up permanent residence in the country.