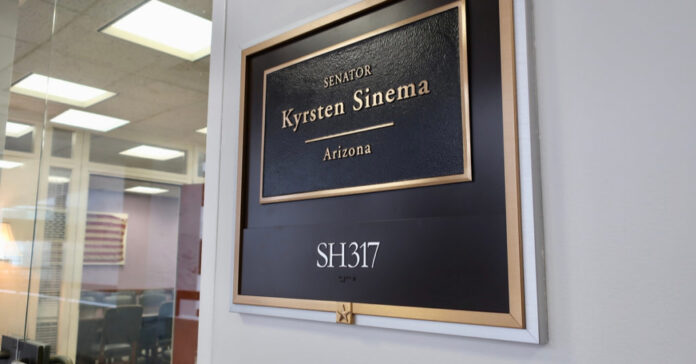 Pro-Biden and far-left activists came after Sen. Kyrsten Sinema (D-AZ) again during a flight on Monday. She had previously been stalked in an airport public bathroom. The activists were attempting to get her to pass Democrat President Joe Biden’s agenda.

The incident on the plane comes after leftists chased Sinema into a bathroom where they berated her over the weekend. They even kept recording her as she used the bathroom.

A message from “Karina” was posted on Twitter by one of these far-left groups called ADAC. The post said, “Message from Karina – I am a DACA recipient from Arizona who volunteered to help elect Sen. Sinema. I asked her to follow through on her promises to immigrants in Arizona and support citizenship through reconciliation.”

There have been a number of videos posted online that show the left-wing activists harassing Senator Sinema at the airport. Those coming after the senator keep pressing her on why she does not support all of President Biden’s radical agenda.

When the president was asked about the harassment of the senator, he dismissed it saying that “it happens to everybody,” and that it was just “part of the process.”

Senator Sinema responded to the confrontation she had in the bathroom with a harsh statement. She also lashed out at those who took part in disrupting her class at Arizona State University.

“After deceptively entering a locked, secure building, these individuals filmed and publicly posted videos of my students without their permission — including footage taken of both my students and I using a restroom,” Sinema said. “Yesterday’s behavior was not legitimate protest. It is unacceptable for activist organizations to instruct their members to jeopardize themselves by engaging in unlawful activities such as gaining entry to closed university buildings, disrupting learning environments, and filming students in a restroom.”

Sinema talked about the 19 years she has been a teacher at ASU. She said she created a safe and intellectually challenging environment for her students. But that environment was breached, she said, and her students were unfairly and unlawfully victimized. Sinema called the event “wholly inappropriate,” and said it was the duty of elected officials to avoid creating an environment where honestly-held policy disagreements become the breeding ground for vitriol, political rhetoric and unacceptable behavior.

Sophia Marjanovic is the person who followed the senator into the bathroom at the university. She demanded that Sinema acquiesce to passing a $3.5 trillion “reconciliation” package. Marjanovic not only posted the encounter but tagged 99 other people.

The senator has been in the middle of the negotiations with other Democrats and the White House. Some want to reduce the spending plan to $2.1 trillion.

Marjanovic seems to want more than just an increase in spending. According to her Facebook post, she demanded the plan plus amnesty for her “indigenous relatives” south of the United States-Mexico border.

She also lashed out at those who are against her, saying that none of them have the right to police her demands for labor protections after all that she has been through as a human trafficking survivor.

Marjanovic has a Ph.D. and appears to be a well-known political and progressive activist. She even introduced then-presidential candidate Sen. Bernie Sanders (I-VT) at a campaign event in New Hampshire.

She warned Sinema that people like her knocked on doors to get her elected and they can also get her out of office too. Then Marjanovic demanded: “We need the Build Back Better plan right now.”

With the Democratic Party in chaos, the temperature of emotions may continue to rise.