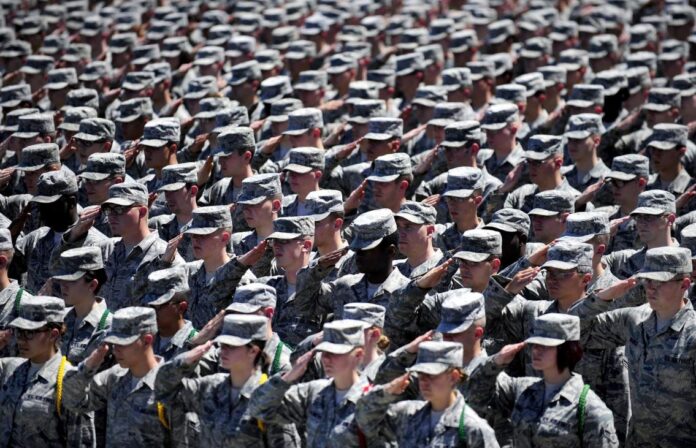 Would you be surprised if someone told you that the radical Left was doing the work of America’s enemies? Most people could probably list half a dozen things offhand that the Democrats have done in the past seven days alone to forward our enemies’ causes and sabotage America’s interests.

Ever since the radical Left lost its mind in the 1960s and started attacking our military, they have moved farther and farther away from recognizable forms of protest to committing outright treasonous actions.

According to a new poll from the Ronald Reagan Institute, about 56 percent of U.S. citizens polled said they have “a great deal of trust and confidence” in the military, which is down from 70 percent in 2018. Included in the survey are the opinions and views of more than 2,500 American citizens who were asked questions in the month of February 2021.

“To see this drop is quite a concern,” said Roger Zakheim, Washington director of the Ronald Reagan Institute. “This is not just the events of the past 12 months. We’re seeing this trend now.”

Why is this happening?

As a nation, we should be extremely concerned: Our U.S. military is the last surviving institution that most Americans still have faith in. The radical left’s endless disgusting attacks are eating away at the honor and sacrifice of our troops causing trust in the U.S. military to crumble to depths never before seen.

Traitorous Democrats in our own Congress have smeared the U.S. military on the House floor as an instrument of “white supremacy” and “white nationalism,” while Nancy Pelosi calls statues of American generals ‘monuments to hate.’  These utterly anti-American radical smears are destroying the fabric of our nation. The thing is, that’s exactly what the Left wants: they will not be satisfied until they destroy our country at its very roots.

Polling shows that 91% of Americans 50 or older still respect our military, but the Radical Left’s anti-military propaganda has caused support to crater among younger Americans, age 18 to 29. The Left is brainwashing the next generation to hate our military and they are tearing apart our country in the process.

A Democrat-led House Armed Services Committee held a hearing on “White Supremacy in the Military,” calling it a “greater threat to the homeland than foreign terrorism,” profiling the U.S. military as full of hate cells, while in January Democrat Rep. Steve Cohen (TN), characterized white male service members as a potential insider threat, in language that makes our troops potential targets of domestic terrorism. He claimed that most white men did not vote for Joe Biden—making our troops a target of domestic terrorists. Read his garbage quote here:

“I was reading about this on my Twitter account, I guess, and people were reminding people of Anwar Sadat and Indira Gandhi who were killed by their own people. I was thinking, the guard is 90 some odd percent, I believe, male.

Only about 20 percent of white males voted for Biden. You have got to figure that the guard, which is predominantly more conservative and I see that on my social media, and we know it, they are probably 25 percent of the people that are there protecting us who voted for Biden.

The other 75 percent are in the class that would be the large class of folks who might want to do something. And there were military people and police who took oath to defend the Constitution and to protect and defend who didn’t do it who were in the insurrection. So it does concern me.”

Now in March, Joe Biden’s Department of Defense has lost its mind and it’s more concerned about fighting racism than fighting the next war. Biden ordered a military-wide stand down to root out “extremism in its ranks,” but you’re damn well sure that he’s not rooting out BLM or ANTIFA.

Our enemies couldn’t be happier–the radical Left is doing their work for them. The Left is already getting their way and making our troops a target, and they’re not stopping: defund the police has turned into defunding the Pentagon, and Marxist cries are growing louder by the day to slash our military budget and use the money to redistribute wealth and expand the welfare state.

If conservatives don’t take back Congress, the Left will do all they can to try to capture the U.S. military. The Left wants to hijack it for their own ends. Nancy Pelosi is building her own private army on Capitol Hill and making guardsmen sleep in a garage after she gets her photo-ops of course.

If this disease of Leftism continues in America and the Left continues to assault and tear at our U.S. military, we will lose our next war. Only then will the Left and our enemies be happy.