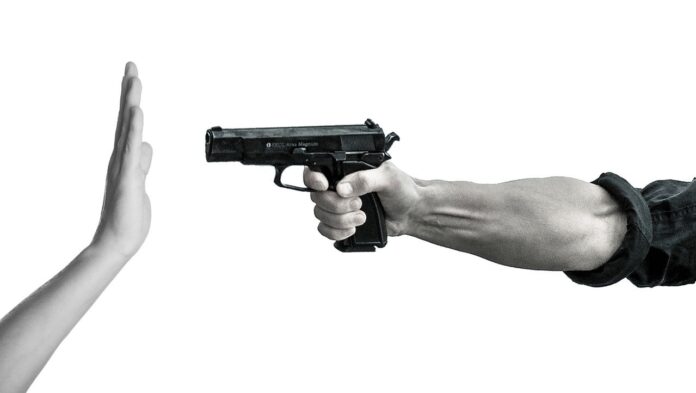 Democrats are drooling over the recent shooting in the state of Colorado. Every time there is another shooting on this level, it decimates the country. The liberals use the tragedy as an opportunity to push their political agenda instead of looking for ways to assist and help those affected by one man’s deeds.

The left wants to argue about the terminology behind the shootings and even focus on the shooter’s race. But in the end, it does no good because it is not dealing with the root of the problem. The problem on hand is not what a person looks like but rather the liberal poison that tells the person they are worthless and deserving of death for trying to live free as an American. When the liberals take the hope away from people, there is nothing that gives them purpose in life.

The man behind the shooting will be targeted by the left to politicize their desire to strip away the right to bear arms in America. The facts that the left will use to spin their dangerous agenda will be tainted with liberal lies. They will be numbers that cannot be trusted.

Mass murder was once defined as the death of four people and the shooting by the FBI. But that continues to change over the years because the liberals want to change the rules, so it is easier for them to change things into a liberal-run America.

By 2013 the definition of a mass shooting was reduced to three people’s death, and the shooter did not have to die. The interesting part is that terrorist attacks, gang-related violence and other like crimes were not included in those instances.

Democrats are getting specific and creative with how they are approaching their agenda. Any tragedy they can sink their teeth into will work for the passing of the fake propaganda. They even have their media agencies working overtime to promote every grimy detail of the event so it stays fresh on everyone’s mind until they can get their agenda pushed through.

The media has a lot to do with what is called a mass shooting. They continue to play into the definition change that slowly takes place behind the scenes. Mass shootings now can happen, and there not be one life lost, and it will be called a mass event.

The Democrats are trying to make the point that redefining the accepted definition of a mass shooting will undoubtedly fit their agenda. They must have an event that will give them support to take away the right to bear arms.

The shootings that they love to focus on are those people that use semiautomatic weapons. The left loves to call them to assault weapons. Because it makes it sound like a military-style weapon. The truth behind these styles of weapons is that they are not military. They are just another fancy style that releases bullets in a fury.

The Democrats use many tactics to confuse people, so they are confused as to what exactly is going on. The definition of mass shootings, assault-style weapons clarifications, the gender of the shooter, and now the cultural or religious background of the person is focused on. These angles are used to confuse people into believing that guns are dangerous and need to be destroyed.

Joe Biden and his liberal entourage of liberals have no clue what it means to be American. They want to take away the people’s ability to defend themselves so they can exert more control over them without resistance. Any group of people who cannot defend themselves from attack is forced to comply willingly with established rules. And most of the time, those rules are oppressive and only serve the top elite.

The Democrats need gun control measures put in place to continue their growth into a dictatorship position. Their attempts to grab power and to remove freedoms will only continue until the people stand up and defend themselves. But if they do not have the weapons to stop the invasion, there is no danger to the invaders.