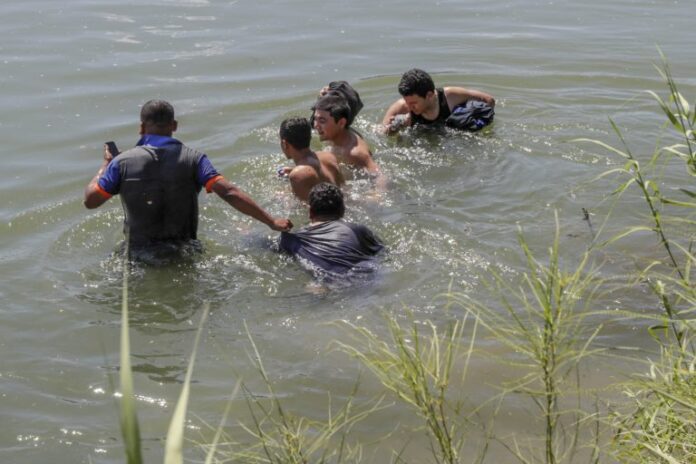 Joe Biden’s famous line of “C’mon man” indeed is well said of the forgetful president. Biden’s reluctance to meet with the press and give updates on the immigration issues proves he has no plan at all. His administration can only protect him so much before people begin to put pressure on for him to answer for his failures.

Several states are already coming after Biden and the socialist path he wants to take America down. And it should not be a surprise that Texas is leading the way. Governor Greg Abbott is taking on the Biden Administration for their ridiculous approach to the immigration issue.

The Democrats are letting the pot boil to a point for an unknown plan. They are a party that thrives on conflict. They need trouble in order to try and put into place their liberal ideology. Conflict becomes the mechanism for them to introduce destruction to the country.

The Democrats believe that they can get away with anything. But with Greg Abbott on the scene, they have no chance of hiding. The Texas governor and Steve McCraw, the Department of Safety Director, took an ariel tour of the border just to see how bad things really had gotten since Trump left.

They witnessed 21 illegals hoping the river and running over the border. There was no fear of the agents shooting at them or being arrested. Biden has downplayed border security’s seriousness so much that the illegals believe they have a right to be here.

Abbott went on record and stated that “In all of last year, in the Rio Grande Valley sector, there were about 90,000 apprehensions. Just this year, there have been 108,000 apprehensions there. More than 800 criminal aliens have been arrested this year, including violent MS-13 gang and drug cartel members.”

Biden’s immigration talk is a bunch of nonsense, as the ariel pictures prove. He has created a crisis and is continuing to let it build. He will either have to deal with it or use it as another means by the liberals to sneak socialist ideology into law—something they did with the last COVID-19 bill.

Steve McCraw noted that “They move ammunition, weapons, and cash.” All over the border. Biden is giving the drug cartels a chance to rearm their efforts in America.

Illegals got the message that no one is illegal to Biden and his Democratic team. Other illegal supporting groups also hold that belief. But by law, they are illegal, and they have to be kept out. The only way they can enter legally is by becoming an American citizen. They have to let go of their past identification of their other country and embrace being an American. There are no African Americans or Spanish-Americans; there are just Americans.

The illegals think Biden is a humane president. But then they get over the border and caged up like animals and forgotten about. Biden has violated the law by holding kids longer than 72 hours. He forgets that there is even an issue since he has to be reminded of the problem daily.

His problems started the day he thought he knew better and removed all of Trump’s immigration policies. Brandon Judd is the National Border Patrol Council president, and he stated, “This is not a Republican vs. Democrat issue. It’s an issue that impacts American citizens. The catch and release program is allowing cartels to prey upon the innocent. Now, because of current policy, cartels are allowed to go into other countries and advertise their services – encouraging women and children to put their fate in their hands.”

Donald Trump proved that simple changes to the way things are done could big, massive improvements. The Democrats did not want to deal with the immigration during that slow period, so now here they are trying to scramble and do things after the fact. They are a party of reactionaries. They react instead of using a proactive approach and dealing with the problems before they become massive. Donald Trump’s measures were in place until a permanent solution could be found. But the liberals hated him so much that they refused to work with him for the benefit of America.