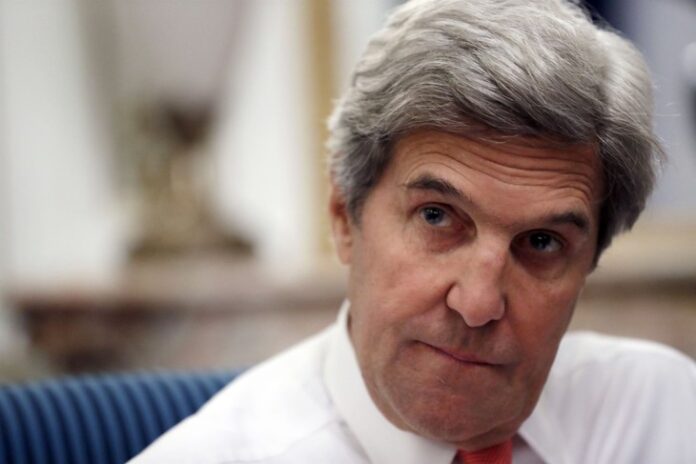 John Kerry boarded an American Airlines flight and made a choice to remove his mask for over five minutes. Disturbed by the flagrant disregard for the rules, another passenger took his picture to show the hypocrisy of the Democratic Party.

Kerry was not trying to eat anything or even take a drink of a beverage. He took off the mask and allowed it to dangle on his ear while reading a book. The person he sat by was masked up, but Kerry did not care about his safety. He was more concerned with his own desires than promoting a caring nature of protecting others by wearing the mask.

American Airlines refused to tell the rebel to put his mask on. They made sure every other passenger had their masks on. Any violations on other flights would mean expulsion from the plane. But they love their environmental hypocrite because he bought a first-class ticket.

The liberal-loving airline has yet to enforce its rules on everyone. They believe that the liberal elites can live exempt. But that is just going to sit well with Americans forced to do things that they hate to do.

Nick Arama reported that “Kerry appeared to be reading a book, not eating or drinking, and the mask appeared to be hanging off his ear. Joe Biden has not only made a mask mandate a significant part of his campaign, he also issued an executive order making it mandatory on federal property and on federal transportation.”

Crooke Kerry is a hypocrite of terrible proportions. He not only kills the environment by flying but something also he is totally against. But he also hates the common folk because he refuses to wear a mask that his boss keeps telling everyone is saving lives. But the science does not even support those statements.

American Airlines needed to cover their tails, so they came and told people that they were investigating the incident. That was their way of covering the issue up as they have the intention of following up. The rules vary by airlines, but they all have a mandate that the mask be worn.

One would think that Joe Biden would have chewed out his beloved climate czar. The truth is Biden just cannot remember the issues since his mind is failing.

Kerry took some time to defend himself. His excuse was that he just forgot. An age-old statement that really means he forgets until caught in the act. A lapse of thinking seems to run wide within the Democratic Party.

The airline stated in their defense that “Our team works diligently to make sure customers are wearing masks properly as they travel with us, and flight attendants pass through the cabin several times during flight to ensure compliance. The crew did not observe Secretary Kerry without a mask, and they were not alerted by other customers to a non-compliance issue. We continue to review the matter and we are reaching out to Secretary Kerry to underscore that all customers are expected to wear masks for the duration of their trip.”

At least they are going to send him a letter. A warning that he will never make it to his desk as he will just toss it in the trash and see it as more junk mail. And yet, they will continue their selection process for kicking people off their over-crowded flights.

There is not one liberal telling Kerry to obey the rules. The lie they tell the public is a story that is full of nonsense, and they know it. If the virus were as nasty as they say it is, they would have no problem wearing a mask to protect themselves. But the truth is that the mask does not work at all. The liberals just do not want the nation to know the truth.