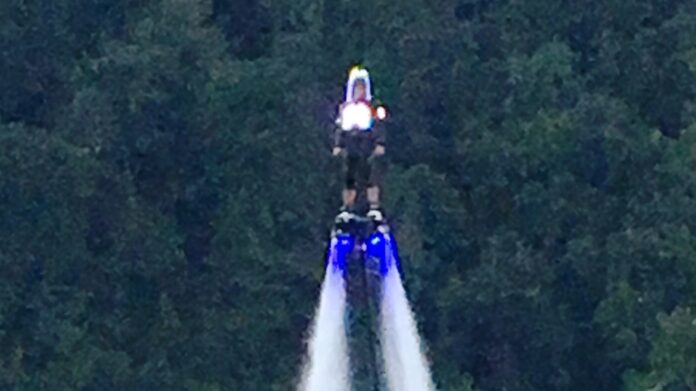 2021 has to be better than 2020. Between gaining Joe Biden as our president and the pandemic restrictions that simply won’t stop, we need a glimmer of hope. We need a reason to smile as 2021 pushes on.

We’ve seen them in movies. We’ve been told that this is part of our future.

Although we still haven’t seen flying cars or hoverboards, we may actually get to see jet packs in the near future, at least on battlefields.

The Defense Advanced Research Projects Agency (DARPA) is closely connected with all branches of the military. They’re often the ones responsible for the futuristic tools that are being used and also with providing Special Operations with some new and exciting gear to use in different missions.

DARPA is exploring the use of a “portable personal air mobility system.” As identified in a solicitation, they’re looking for it to provide “cost-effective mission utility and agility.” It can have a positive impact on urban augmented combat and personnel logistics.

Special Operations Command, in 2019, was interested in developing “individual lift devices” and even found a partner to bring the ideas to life.

Between what DARPA is currently researching and what Special Operations Command has already expressed interest in, jet packs are close to becoming a reality.

Jet Pack Aviation is a California-based company currently working on an ILD turbine engine system. It would allow an operator to travel at a speed of 200 miles per hour. The system would allow for a flight time of up to 10 minutes. This means that operators would be able to fly from their base and into battle, offering a high level of convenience.

Mission-ready has never sounded so cool.

Countless reasons exist for why jet packs could be beneficial. It ensures that people are deployed quickly. There’s no need to have room for a large vehicle to land. Plus, it offers a greater level of speed and control than jumping from an airplane. No one wants to dangle from a parachute in the middle of a war zone.

The element of surprise could be amazing. That is, of course, assuming that the jet packs aren’t too loud.

The request from DARPA to create such a device is complicated. If a jet pack is to be created for military use, it must be capable of withstanding the elements of the battle. It must also be easy to use. The goal would be for anyone to be able to learn how to use the jet pack safely and effectively with a minimal level of training.

There’s no talk of cost, yet. However, regardless of the cost, there are going to be reasons to use these. While they may never become standard issue to every two-stripe in the military, they may be used in some of the various special operations that the military embarks on throughout the year.

There’s no talk of when these could be made available to everyone, either.

Plenty of military toys have been made available to civilians. From knives to tactical gear, we can get our hands on quite a bit. We’re only a quarter of the way into 2021. There’s the hope that we can see jet packs on members of the military by the end of the year.

Jet pack demonstrations could certainly enhance the entertainment at air shows around the country. Everyone can “ooh” and “ahh.” There will always be someone who will figure out how to do stunts with one of these packs strapped to their backs, too.

And if those jet packs become available to citizens by 2022, there will be plenty of people lining up to ensure that next year is better. Better grab those shades…our future is looking bright.