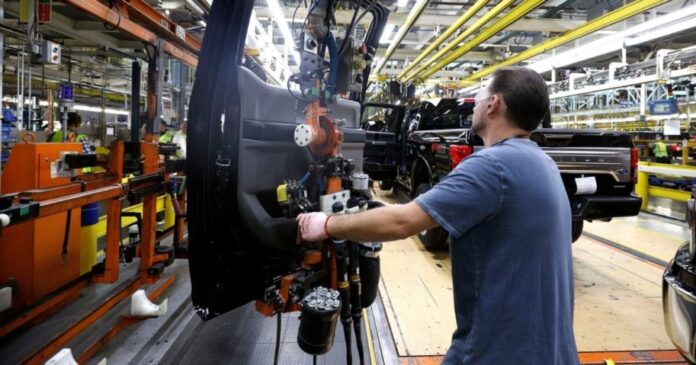 It was no surprise that during the 2020 presidential campaign’s then-White House candidate Joe Biden, as a lifelong Democrat, promised to work and fight American workers and unions. After all, Democrats have supposedly been the party of blue-collar workers for nearly half a century now.

However, with all that former President Donald Trump did for American workers, unions included, that party definition has begun to fade significantly in recent years. Many unions, in fact, pledged their support to the Republican 2020 candidate instead of Biden for those exact reasons.

Of course, not all did.

United Auto Workers is one such group that chose to stick with Biden and the historically “for workers” party.

UAW President Rory Gamble said in a statement at the time, “In these dangerous and difficult times, the country needs a president who will demonstrate clear, stable leadership, less partisan acrimony and more balance to the rights and protections of working Americans.”

But now, a mere two months into Biden’s presidency, the group, and its members are getting plenty of reasons for regretting that decision – 1,600 reasons to be exact.

That’s the number of UAW members currently employed at a Ford plant in Avon Lake, Ohio, who may soon find themselves without work thanks to Biden’s tax and economy policies.

Yes, I know. You’re shocked that Biden is cutting even more jobs from American workers, on top of the thousands he has nixed already.

So how are these jobs going to be cut?

Here’s the full letter sent by the @UAW regarding Ford’s decision at the Ohio Assembly Plant in Avon Lake. US Sen. Sherrod Brown (D-OH) said today he’s been in touch with the administration on President Biden has “strong feelings” about this topic. pic.twitter.com/03zBKESqua

Well, according to UAW, which has some 400,000 members, Ford made plans in 2019 to build another plant in Avon Lake. They put aside $900 million for the project and met with UAW and other unions to work out the logistics and making plans to maintain “a strong manufacturing presence in the United States.”

And with Trump’s booming economy and many tax cuts, as well as foreign policies that encouraged a lessening dependence on out-of-country facilities and employees, it seemed to be a sound investment for all parties involved.

However, here we are two years later, and things have changed a bit.

Biden’s current tax plans, climate control processes, and regulations, as well as his foreign policies, have all quickly spelled out a situation where companies would lose and lose big, should they invest in more American jobs and facilities.

And so, Ford has recently announced that while they will be keeping the plant in Avon Lake, Ohio, as they have already invested $185 million into it, according to Reuters, it will not be what it was once meant to be.

Instead, the company will build another plant in Mexico, where cheaper labor and lesser regulations can be found at the ready.

“In these dangerous and difficult times, the country needs a president who will demonstrate clear, stable leadership, less partisan acrimony and more balance to the rights and protections of working Americans.” – UAW President Rory Gamble

Naturally, UAW isn’t thrilled with the decision and has since written a letter to Ford, expressing their deepest disappointments and threatening to take action, should Ford continue its plans to betray American workers.

It reads, “We 100% reject the company’s decision to put corporate greed and more potential profits over American jobs and the future of our members. We expect the company to honor its contractual commitments to this membership and when it fails to do so we will take action. We are intensely exploring our option at this time.”

UAW Union got what it voted for. pic.twitter.com/JLBJflVvlk

And UAW isn’t the only group with similar regrets, even if they haven’t fully acknowledged that it’s Biden who’s to blame.

Pro-Life Evangelicals for Biden also thought our current president would be a good choice and bring better things to America.

However, with the passing of Biden’s COVID relief bill, they’ve recently learned that they put their hope in the wrong man. The group wrote a letter condemning the president’s recent decision to exclude the long-held Hyde Amendment, which prevents abortion from being funded by tax-payers, in the current stimulus bill.

In 2019, Ford made a commitment to invest $900 million at its Avon Lake, OH plant – NOW, it’s reportedly moving the entire project to…

This is unacceptable. At today’s Senate Finance Committee hearing, I called on Ford to keep its promise to Ohio workers. pic.twitter.com/PlMDeoqTZ1

This group, like UAW, should have seen the writing on the wall. Biden isn’t for the American people, not in the slightest. That should have been obvious when he first began proposing massive immigration reform, increased regulations on manufacturing and energy industries, and tax policies that would push production off of American soil way back in 2019.

Clearly, they missed it, somehow – or simply chose to ignore it based on their dislike for Trump. And now, like the rest of America, they are paying the price.