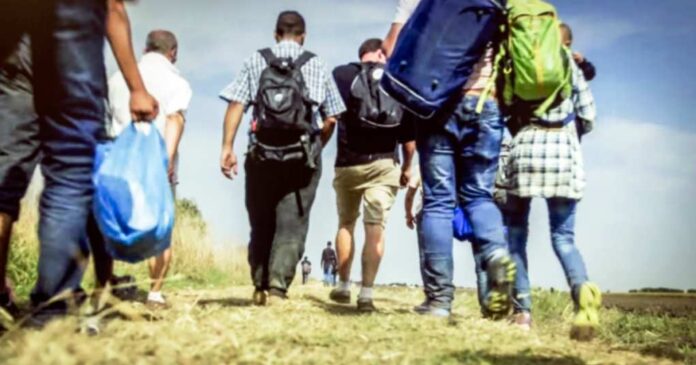 Joe Biden is stuck between a rock and a hard place in terms of immigration. While liberals are cheering on the hordes of hungry Haitian refugees living in squalor at the US/Mexico border, conservatives would just as soon send the entire lot of them packing.

Biden stood tall and proud when he embraced immigration with his come one, come all, policy. He shouted from the rooftops how America would always accept the world’s poor and downtrodden, but he failed to anticipate the hordes of Haitians who would take him up on his generous offer, and he’s catching static about it from both sides of the political fence.

Homeland Security Secretary Alejandro Mayorkas is taking the biggest brunt of the anger but he knew it was only a matter of time before things hit the proverbial fan. “Getting hit from both sides in the matter of immigration is no surprise. We’re in the epicenter of the country’s divide, regrettably,” he told NBC News.

While the Biden administration would rather redirect their focus toward the pandemic and other pressing matters, their head honchos’ worldwide invitation is keeping them immersed in an overwhelming ocean of Haitian immigrants.

But let’s let the figures do the talking. In April, only 43% of Americans thought Biden was doing okay with immigration. As of this writing, that figure has dropped to 35% and falling. Of the Democrat lawmakers on Capitol Hill, only 60% are still holding on, but they too are dropping like crap-footed flies.

Bidens’ lack of agenda was further highlighted by recent images of horse-mounted Border Patrol agents lashing out at Haitian immigrants trying to cross the Rio Grande river. To save face, Mayorkas and Biden were quick to lash out at the agents, but this only led to their embarrassment when it was determined that the only thing being whipped were the horses. Oops…

If the two were better involved in reality they would have known this was a false assumption and they would have been quick to defend the American-born and bred agents. And they wouldn’t have dispatched the sniffing Gestapo from Homeland Security to the border to check things out. But these are all things they should have been aware of and weren’t. Their lack of faith in America’s Border Patrol is unjustified and overly apparent.

Capitol Hill become so outraged by the White House response that Mayorkas was asked directly to his face if he was running a “rogue agency.” His anticipated answer was, “I couldn’t disagree more vehemently.”

Immigration advocates and Capitol Hill politicians who have in the past adamantly supported Biden, are spitting fire. His promises to revamp immigration laws as a top priority have fallen flat as keeps his one-track mind focused on infrastructure and continues to ignore other pressing issues.

Here’s the shake your head part. While campaigning Biden slammed Trump’s immigration policies to hell and back as America watched his aged neck veins nearly explode. But hold on…He hasn’t changed a thing.

It isn’t that the Biden administration is ignoring Title 42. They’ve chosen to leave it in place even to the point of appealing a court order to have it removed, which is weird. First, they invite immigrants to come on in, then they turn their backs on them. Who can disagree with this short analysis?

As a display of sticking to his campaign promises, Joe Biden handed a sweeping immigration reform bill to Congress when he took office. Since then…you guessed it. Nothing. This concerns lawmakers who are starting to see more and more of Obama’s strict heavy-handed influence at play.

As far as anyone is capable of knowing, don’t look for improvements in much of anything any time soon. Biden already lied about flying all of the hopeful immigrants back to Haitai while he was instead shipping them to Tuscon, Dallas, and your hometown, USA.

Some might even be bold enough to say that Mayorkas and Biden are off doing their own thing. Some might even say this would not be an assumption. Now. The question remaining is, just what in the hell are they up to that we aren’t privy enough to know about? Got any ideas?