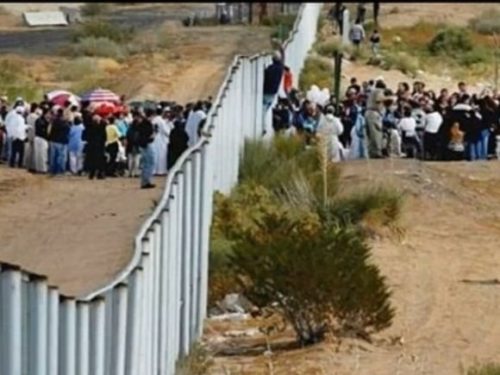 The crisis at the southern border has grown to enormous proportions. And yet Biden still continues to believe that everything is going to be just fine. Biden is not the only fearful Democrat to live in a basement. House Majority Leader Steny Hoyer has come out of his cave now that the coronavirus is just about over. And it should not surprise anyone that he wants to fix immigration liberally.

Biden is purposely creating a conflict at the border to make it appear that the Democrats have the answer on how to fix the problem. Hoyer claims to have the answers that are needed to fix the southern border crisis.

The border crisis was put in motion by the godless Barack Obama. He thought it would be best to build cages and stick all the kids in them like they were animals on display at the zoo. The media craftily covered up his unethical actions so he would appear to be a righteous man.

Then comes Donald Trump, who singlehandedly fixes the unethical practices Obama left him, and the media lies about him accomplishes and states that he left the kids in the cages. The facts show that Trump’s immigration orders cleared out the detention centers and stopped the caravans that were pressing against the border.

Joe Biden steps into a hijacked office and tells the world to come on up to the border. But what he did not realize is that so many kids would come on their own. So, he designed storage containers to house the kids. The kids go from cages to shipping crates. Now all Biden has to do is shut the door and send them out to sea.

Hoyer has the idea of meshing all the programs into one big mess. He wants to take the American Dream and Promise Act along with all the other failed Democratic messes and try to put them all together.

Under his idea, the DREAM Act inductees and others would be granted immediate citizenship. This would allow anyone coming to the north to be allowed to be a legal resident of the United States without going through the proper channels.

2.5 million felons would be granted citizenship. The act of trying to grant this kind of status for the sole purpose of cleaning up the liberal messes created by Democrats has been done before. And those efforts failed to address the problem. So here it is again, and the Democrats want to do the same failed thing they have already tried.

In an attempt to gain Republican support, Hovey would want Dreamers to finish high school, pass a background check and be in the country for at least four years before they turned legal age. The problem with his plan is that no felon is going to come out of hiding to try and pass a background check. They will continue on the way they have been living.

Democrats have longed for the day that they would have complete control over the two houses of government. The only thing standing in their way of passing destructive legislation is a filibuster that they have used in the past to keep bills from being passed.

But now that they have power in government, they are willing to do away with the filibuster just so the Republicans cannot use it to stop their dastardly deeds. The liberals are so short-sighted that they cannot see the future clear enough to know that they are running of time. They may have pulled a fast one on the American people in 2020, but it will not happen again.

The Democrats know that in order to pass their Dreamer bill and the Farm Workforce Modernization Act will depend on their willingness to get rid of the filibuster they overused in previous years.

Joe Biden has no clue what is happening in America. People such as Hovey, Pelosi, and Schumer are the ones that are calling the shots. They are the ones that are pulling Biden’s strings. They needed him to learn how to use a pen so he would sign any bill or law put in front of his forgetful face.