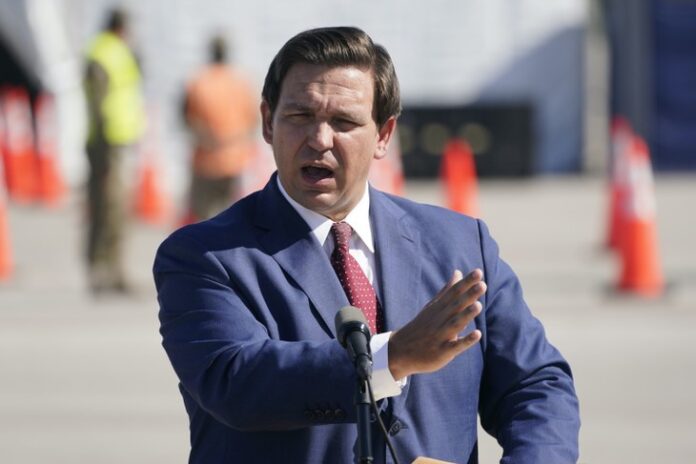 Floridian Governor Ron DeSantis continues to defy all odds. He presents himself as a leader who is not afraid to stand up for what is right and what would benefit Florida the most. The media is working overtime to smother the man because they do not want the nation to focus on their beloved Andrew Cuomo. They would rather embrace crime instead of praising the success of an upright and honest man.

The same attack practices that the media used with Donald Trump are being enlisted in their attacks against DeSantis. The Democrats know that he is a significant threat to them in the upcoming election cycle. So, they are sending their forces out to smear him before he can gain real momentum. Except he is winning at every turn.

The reporter that took swipes at DeSantis works for the Miami Herald. Julie K. Brown is her name, and she tweeted out that “Everything is GREAT in Florida!” Meanwhile, just spoke with a woman who has been waiting in this Covid vaccine car line in Miami since 4:30 am.”

@GovRonDeSantis: “Everything is GREAT in Florida!” Meanwhile, just spoke with a woman who has been waiting in this Covid vaccine car line in Miami since 4:30 am. pic.twitter.com/6ztJJm0va4

Brown makes the people waiting for a shot into victims. She would describe to them to be suffer for their lives just because they have to wait in line for a vaccination. Everything is incredible in Florida because of Ron DeSantis, and that point of truth annoys the liberal media.

The great thing about the tweet is how the public responded to her little gripe over DeSantis. People are pointing out that a little wait in a car is excellent compared to the other people that still cannot get the shot yet. At least the driver was able to be stuck in the arm.

The line of cars in question was one of the most busiest in the city. Other sites had people through in a matter of minutes and not hours. The driver could have gone to another site but chose to go to the busiest one around, so they have no right to complain.

for example, my neighbors praising the vaccine sites here. pic.twitter.com/0qbvAkDII5

Brown was trying to create crashed and burned story once it was revealed that the rules for COVID shots were relaxed. Anyone could come and get one. They were even taking people who did not sign up online. The site opened its doors up to the public, and they started showing up. Brown’s attempt to slam the governor on a site administrator’s decision was purely comically at best.

The public knocked Brown out in the first minute of the round. Jason Hopkins stated that “That’s because that site was set up so anyone can drive up and get the shot. God forbid people wait in line a few hours. People spend multiple nights oustide stores to get a good deal in TVs every year and nobody has a problem with it.”

And Phil Gramm stated that “Is it Gov. DeSantis’ fault that the lines are so long at Disney World too? I understand there are no lines at all at Disneyland so Gov. Newsom must be doing a swell job.”

One remark after another flooded Brown’s posting. Her attempt to smear a great governor blew up in her face. The fake news she tried to pass off flopped, and now she sits crying at her desk from the embarrassment of being a fraud reporter.

Brown stated that the driver of the car was waiting at 4:30 am for their shot. The problem with that statement is that the site never opened until 7 am. The driver was crying over the site being closed in the middle of the night. The doctors have to sleep just like everyone else. But liberals think that people need to be available to wait on them hand and foot every second of the day.

The liberals could not get their facts straight to attack Donald Trump, and now they cannot even get their act together to take on DeSantis. They will never learn that honest and upright people are hard to attack, and when they know they are in the right, it makes it even harder. Brown should learn that she cannot attack the governor without herself looking foolish.