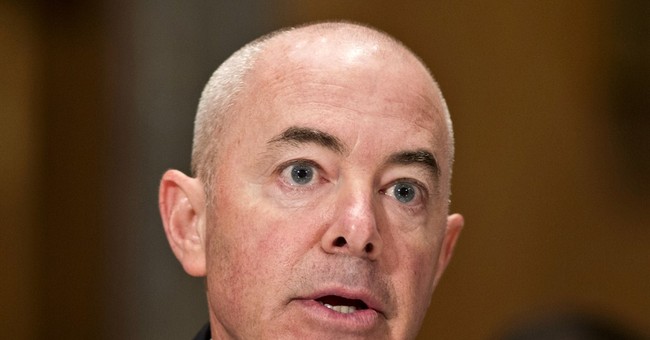 Department of Homeland Security Secretary Alejandro Mayorkas hit the Sunday shows today, trying to smooth over a very bad week for the Biden administration when it comes to the border.

Mayorkas was trying to deal with a lot of fall-out. The Biden Administration finally caught a lot of flak — not only for having thousands of illegal aliens congregating under a bridge in Del Rio, Texas, immediately after crossing the border. But they got even more flak for the false story that the Border Patrol whipped migrants trying to enter, while on horseback. Despite the fact that the story was false, the Biden Administration seemed to embrace it and didn’t deny it, even though it reflected badly on them, because it distracted from the real problem that they were doing nothing about — the massive influx of people.

Mayorkas finally got a rather obvious and long overdue question from the media. Fox’s Chris Wallace asked him why weren’t they building a wall to stop an obvious stream of people crossing, as happened in Del Rio? Suddenly, Wallace realized when he saw the pictures, how the wall can have great utility.

“It is the policy of this administration: we do not agree with the building of the wall,” Mayorkas said. “The law provides that individuals can make a claim for humanitarian relief. That is actually one of our proudest traditions.”

Apparently entering illegally is a “proud tradition” to the Biden administration.

No, they didn’t stop the illegal aliens from coming in; they just poured right in. Then the application of the “law” that Mayorkas talked of? While some were deported, most seem to have been released into the country, as Mayorkas himself admitted.

Approximately, I think it’s about ten thousand or so, twelve thousand,” Mayorkas told “Fox News Sunday” when asked how many have already been released. He then acknowledged that this number could very well go up as the 5,000 other cases are processed.

Chris Wallace observed that about 44% don’t show up, if they are given a notice to appear later for their asylum claims. Which means that after being released, about half just never show back up.

Mayorkas also acknowledged the illegal aliens were not required to be tested or asked about vaccination status.

Mayorkas also went on CNN with Jake Tapper. Jake Tapper then nailed the Biden Administration on two counts. First, he asked how the comments made by Joe Biden and Mayorkas prejudiced the investigation into how the CBP handled the illegal aliens at the border. If Biden is already saying that the agents are going to have to “pay,” how can you have an independent investigation?

Then Tapper also pointed out that some of the claims about the story were false to begin with.

Although Tapper doesn’t say what specifically was false, the obvious part about the ‘whips’ or whipping people never occurred, as the video has shown. Mayorkas praised the Border Patrol and in response, Tapper said that maybe Mayorkas should share those words with Biden. Oh my, that was quite the shot and well deserved.

With Biden, it’s all about whatever will help him and the narrative — he doesn’t care who he throws under the bus in the process, be it the Border Patrol or Americans and SIVs still trapped in Afghanistan.