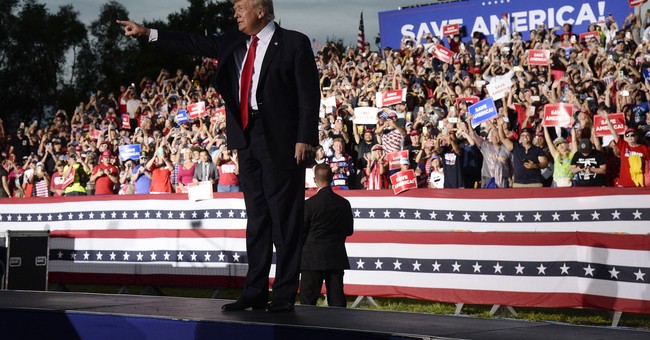 President Donald Trump held an “epic rally,” in his words, today at the Georgia National Fairgrounds in Perry, located in the middle of the state.

Three-and-a-half hours before Trump was even scheduled to speak, it was already packed.

If you don’t get a good picture that these rallies are lots of fun, this picture of Rep. Vernon Jones, the state representative who was a Democrat but then flipped to Republican and became very pro-Trump, this gives you an indication of that spirit from a prior Georgia Trump rally. It’s worth remembering that Jones spoke at a pro-Trump event last November, right before the Georgia recount fight, as my colleague Sister Toldjah wrote.

Trump’s longtime friend, former football star Herschel Walker, who is from Georgia and is now running for a Senate seat from the state, also spoke at the event. Trump endorsed him in his run.

Trump also may be kicking off his own campaign as well. He had already indicated about ten days ago that he would probably run again, especially after the debacle that Joe Biden left in Afghanistan. He said he was just greatly affected by what military families had been through and that “ It is getting to a point where we really have no choice” in terms of running.

Then last night, he was asked during a TV interview whether if there was anything that would prevent him from running again,

“Well, I don’t — I guess a bad call from a doctor or something, right?” Trump said on “The Water Cooler” show on Real America’s Voice.

“Things happen. Through God, they happen,” he added. “But I feel so good.”

So, that seems pretty clear that he’s in, and he wasn’t holding back tonight at the rally.

Trump started off smartly, congratulating the University of Georgia Bulldogs.

Trump ran down a list of some of the disastrous things which Joe Biden had done — from politicizing the ranks of the military, bungling Afghanistan, and throwing the border into crisis.

“Other than that, how are things going?” Trump joked. He said Republicans needed to win to defeat all this in 2022. “To be followed by an even more glorious victory in November, 2024,” he smiled, giving one more indication about his intentions.

Trump went after Biden on the issue of the border and slammed him for going after the CBP agents over the fake whip story rather than actually addressing the border crisis. “Going after the riders of the horses,” he scolded Biden. “Most people would say they were doing one hell of a job.”

Then Trump spoke about Afghanistan and he did a few things that were very special. First, he recognized the U.S. service members who had been killed and wounded in the Kabul suicide attack. He said the crowd to remember the wounded, and he had set aside 13 seats of honor to remember them at the rally.

He also invited a local Marine who had served in Kabul, helping to evacuate people, onto the stage. Lance Corporal Hunter Clark was the man who had helped save a baby, lifting the baby over the wall at the Kabul airport. He got a big cheer.

Trump blasted a lot of the problems with the Biden withdrawal — pulling out of Bagram Air Base and now, China eying the base as a possible strategic operation, abandoning hundreds of American citizens, and getting out people other than the people were were supposed to get out.

He pointed out how that was going to be a problem in the future. We are already seeing that with the people who had been accused of some very serious crimes including a sexual assault on a child, a man who choked and tried to suffocate his wife, and a group of male evacuees who assaulted a female U.S. service member.

Trump also recognized the Durham investigation and how big it was, that it was pointing to the involvement in the Russia collusion hoax of Hillary Clinton and the Democrats. It’s “official,” Trump said. “Think about an evil mind like that,” to go about making up something like that, Trump said, talking about Hillary.

He said he thought there might be more coming out of that.

Trump then took on the Arizona audit and disagreed with the media interpretation of the matter. He said that the media wasn’t addressing all the facts and numbers in the case. He said that as a result of the Arizona forensic audit, 41 legislatures from across the nation wrote an open letter to the American people calling for audits in all 50 states.

Trump also spoke about the people being held because of the Capitol riot. He raised the question that the law wasn’t being applied fairly on the basis of politics. He noted that many folks involved in BLM/Antifa actions weren’t prosecuted whereas the folks at the Capitol were. He also reiterated his belief that Ashli Babbitt was wrongly shot.