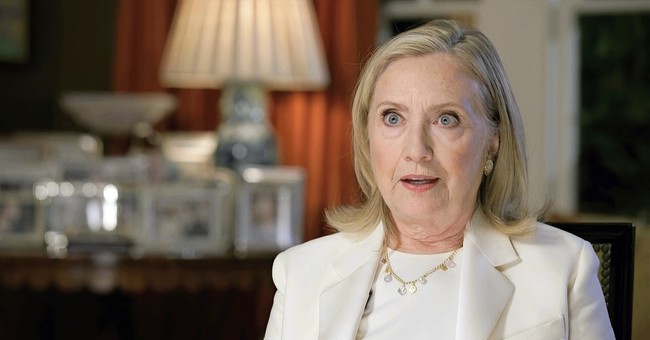 Hillary Clinton is never going to be president of the United States, and there’s no doubt it has grated on her ever since she lost to President Donald Trump.

She tried to blame everything that she could for the loss — from Russia to “deplorable” voters — rather than admitting that people simply didn’t want to vote for her because of her long, negative past history.

She’s struggled to try to find relevance and/or position, since the position she truly wanted has eluded her.

But she did get ‘inaugurated‘ in an interesting ceremony yesterday. It wasn’t as president; she was just installed as a chancellor of Queen’s University in Belfast, Northern Ireland. But, it did come with a horrific looking robe, so she could play at being royalty, with a little boy carrying the train of the robe.

She actually had been appointed in January 2020, but her inauguration was delayed because of the pandemic. She’s the first woman named to the position. It’s principally a ceremonial position that one holds for a period of five years, and involves things like overseeing graduation ceremonies, serving as an ambassador for the university, and providing advice to senior management.

However, Clinton being Clinton, the ceremony didn’t come off without controversy. Clinton was heckled and booed by anti-war folks who were upset that she had been appointed. They shouted at her that she was a “war criminal” and “to go f**k [herself].” They also chastised the University, saying “Shame on Queen’s.”

“Northern Ireland has become a symbol of democracy’s power to transcend divisions and deliver peace, and we need that beacon of hope now more than ever,” Clinton said during her inauguration ceremony.

“But with hope comes responsibilities, the responsibility to be a citizen, to be willing to discuss and learn from people unlike yourselves,” she added. “To debate and compromise in search of common ground to participate in our shared institutions, to respect the rights, dignity and needs of all people, and to uphold the rule of law.”

This might be one of those few times where I agree with the leftists that Hillary Clinton has a lot to answer for and shouldn’t be receiving any honors.

One of the things she needs to answer for is her involvement in the Russia collusion hoax precipitated against President Donald Trump. She talks about upholding the rule of law and transcending divisions — when the Clinton campaign and the DNC pushed a false claim about collusion to both the media and the FBI while they were actually the people behind it.

The FBI pointed a big finger at the Clinton involvement when lawyer Michael Sussman was indicted about two weeks ago. He was indicted for falsely claiming to the FBI that he was not advising Hillary Clinton’s 2016 presidential campaign, when he raised concerns about purported ties between the Trump Organization and a Russian bank. Now, I don’t know if the Durham investigation will be allowed to have its head, but it’s clear from reading the indictment that they think they’ve been looking into others. So, we shall have to see what else develops.