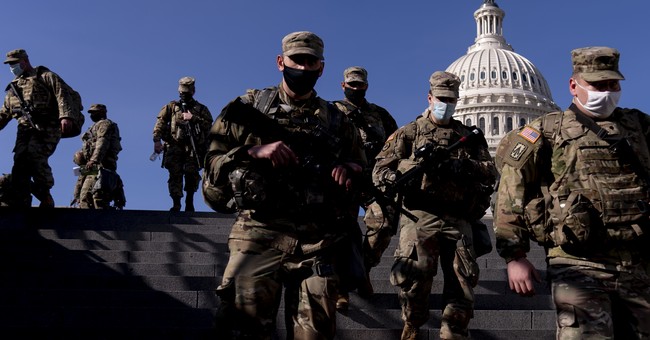 Over the weekend, a judge forced federal prosecutors to release surveillance footage of the happenings on January 6th, and despite claiming the video would endanger national security, what was shown was far from an “insurrection.” Instead, unidentified men in black systematically entered and opened the doors for perplexed protesters to walk through, at which point they mingled and took pictures. The video did not show a violent rush as part of an organized attempt to overthrow the government.

It was another blow to the predominant narrative that January 6th was “worse than 9/11” and the “worst attack” on our country since the Civil War. It also illustrated how far the federal government has been willing to go to push false perceptions. Why hide that footage in the first place? And why do we not know who the men in black are, but we know who every other random grandma is who took a selfie at the Capitol that day?

For a long time, onlookers have suspected that the reason is that the FBI had agents and informants at the January 6th protest. Now, that’s been confirmed, at least in one case.

The informant in question was a member of the Proud Boys, and while it doesn’t say specifically, I’d guess it’s the same guy people have suspected all along as working for the FBI. I won’t mention his name here, because the fact-checkers would love to ding this article, but he’s an outspoken personality that just so happened to be one of the only attendees that the DOJ didn’t charge for being in the Capitol Building.

But, I think it’s a distraction to focus on this one informant. Understand, as someone who has watched many prior leaks from the government get published by The New York Times and The Washington Post, this kind of thing only gets printed if it’s an attempt to get out in front of a much bigger revelation. Remember that recent leak to The Washington Post involving John Durham indicting Michael Sussman? The Post’s write-up made it sound like Sussman was innocent. Then the actual indictment dropped and it was far, far worse.

That’s the pattern going well back into the Trump years, and that’s likely what’s happening here. The FBI needs to normalize for the public the idea that they had people participating in what happened on January 6th. That way, when we learn who the men in black are that opened the doors, or something else related to the FBI’s involvement, it seems like less of a big deal.

In short, you can bet this doesn’t end here. Stay tuned.