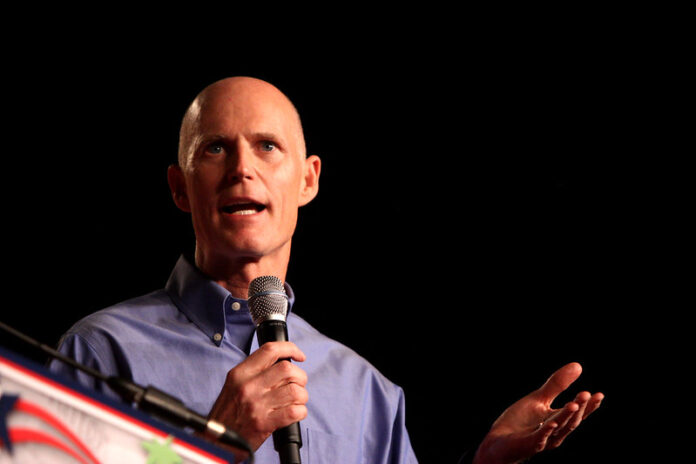 Republican governors nationwide have struggled with how to retain the constitutional freedoms of Americans while fending off a potentially deadly pandemic. Health and safety have, for some, since taken a backseat to the potentially catastrophic effects of socialism, which is being ushered in as quickly as possibly by rogue politicians.

Florida Sen. Rick Scott is joined by Republican Gov. Ron DeSantis in their push to push socialism away from the state of Florida, requesting that citizens of the sunshine state reject and return their government stimulus checks when they’re distributed.

The Palm Beach Post reported that both Scott and DeSantis are calling for drastic action to help citizens reject addiction to government money.

In an open letter to governors and mayors, Scott called the $1.9 trillion bills “massive, wasteful and non-targeted,” urging states to follow his lead and send a message to Congress to “quit recklessly spending other people’s money.”

“By rejecting and returning any unneeded funds, as well as funds unrelated to COVID-19, you would be taking responsible action to avoid wasting scarce tax dollars,” he wrote. “After all, every dollar in this package is borrowed.”

Scott, who was formerly the governor of Florida, called his request “simple and common sense,” adding that money slated for state and local governments is “wholly unrelated to responding to the pandemic.”

During his tenure in office, Scott was known to push away federal funding and even refused to allow Florida to accept Obamacare-related funds to expand Medicaid health care coverage.

Since the COVID-19 pandemic began, we have seen great collaboration at every level of government in response to this crisis. As the former governor of Florida, I understand the arduous decision-making and budgeting process that each of you have undergone countless times in the past year. That is why, as local, state and federal partners have worked hand-in-hand to fight against COVID-19, I have advocated for the federal government to provide needed funding to support small businesses, assist the unemployed and develop life-saving vaccines. Prior to the recent partisan passage of President Biden’s massive, wasteful and non-targeted $1.9 trillion “American Rescue Plan Act,” Congress passed five bipartisan COVID-19 relief packages dedicating almost $4.5 trillion in federal spending, including nearly $400 billion in taxpayer funding to state and local governments.

Now, as part of the American Rescue Plan Act spending package passed by congressional Democrats this past week, state and local governments are set to receive an additional $360 billion in taxpayer dollars, wholly unrelated to responding to the pandemic. Democrats rushed this spending through Congress without a single Republican vote and against growing evidence that local and state tax revenue did not suffer the massive downturn predicted when lockdowns began. In fact, many state and local governments have seen revenue increases over the past year, like California, which is adding more than $22 billion to its reserves.

I am writing you today with a simple and common-sense request: each state and local government should commit to reject and return any federal funding in excess of your reimbursable COVID-19 related expenses. This commitment will serve the best interests of hard-working American taxpayers and will send a clear message to Washington: politicians in Congress should quit recklessly spending other people’s money.

The COVID-19 pandemic is a public health emergency. Just as it does for other major disasters, the federal government has an important role to play in helping state and municipal governments offset the costs of COVID-19 response. However, American taxpayer dollars should not be used as bonus cash to plug budget holes caused by decades of poor fiscal management. This is not a taxpayer-funded bailout; it is a reimbursement for specific, COVID-related expenses.

As mayors and governors, you understand the importance of living within your means and budgeting responsibly so that you are delivering the best possible service to your communities, ensuring maximum return on any government spending and eliminating debt wherever possible. By rejecting and returning any unneeded funds, as well as funds unrelated to COVID-19, you would be taking responsible action to avoid wasting scarce tax dollars. After all, every dollar in this package is borrowed.

I will continue to do all I can to support federal efforts for the things that are most important to defeating this virus, including protecting families and small businesses. I look forward to working with you on these issues and ensuring that we have a sustainable and responsible path forward.