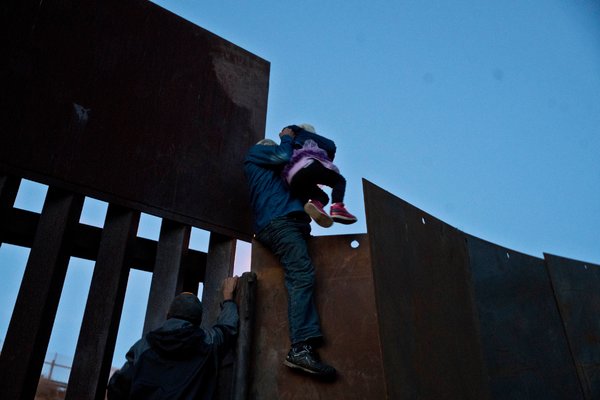 Texas started a movement that is going to cause the federal government to rethink its efforts to open the southern border. The states that share the southern border are moving to protect themselves not just from the onslaught of illegals but from their own president’s negligence and pompous spirit. Biden was eager to remove Trump’s work that he was short-sighted to the point that he could not see the nose on his face.

Two states are suing Biden, and a third is on its way to join in on the fun. The states of Arizona, Florida, and Montana are taking the administration to court, claiming that its policies are destructive and harmful for all Americans.

Republicans and many Democrats are ticked off with how Biden is treating the country. He acts like illegals are more important than American citizens. Ashley Moody is the attorney general in Florida, and she stated that the reason they are suing Biden is that his regulations are in direct violation of the law.

Her words were, “I’ve been speaking for weeks now and alerting Americans to the fact that this administration is thumbing its nose to its responsibilities under federal law. It is required to deport criminal aliens that are here illegally and it is just saying we’re not going to do it anymore.”

Arizona maintains that Biden’s policy violated a federal law that requires all illegals to be deported within 90 days. But Biden has seen to it to tie the hands of law enforcement so they cannot even kick out felons and hardened criminals flooding the border.

Moody pointed out that “First, they canceled Operation Talon, which targeted sex offenders here in the United States illegally and now they’ve released guidance, which is basically releasing into our streets, serious criminal offenders. They’re canceling retainers and requiring our law enforcement leaders to release them back into our state. And this includes heroin traffickers, people that are breaking into homes – you know use of a firearm with some of these felonies.”

It was also revealed that the administration did not even speak with the states about how their decision would affect them. They blindly made the changes and ordered the states to do their best to comply. It is easy for Biden to kick back and make laws since he is not the one who has to implement the changes.

The attorney general from Montana is Austin Knudsen, and he pointed out that “Meth trafficked into Montana by Mexican drug cartels has wracked our state. The problem will only be made worse if the Biden administration continues to allow criminals to stay in the country. Enforcing our immigration laws and helping to keep Americans safe is one of the federal government’s most important functions. The Biden administration is failing its basic responsibility to Americans.”

One would think that Biden would care, but he does not even relate with anyone because of his mental state. These states have with Biden that Biden’s administration violated an existing agreement between the DHS and the states as it relates to immigration and enforcement. Biden ignored the agreement and went rogue, acting like he did not have to comply.

Biden has given the impression that America has an open-door policy at the border. Matthew Tomas of Arizona noted that when Donald Trump took office, the human flow of illegals stopped. Drugs were not being pushed over the border, and humans were safer because they were rescued from their captors.

And that does not even touch on the issue of COVID-19 spreading out into the country. Biden’s approach has opened up America to a new infection outbreak because of the people traveling up to the north.

Brnovich stated it well that “If asked about the poorest policy choice I’ve ever seen in government, this would be a strong contender. Blindly releasing thousands of people, including convicted criminals and those who may be spreading COVID-19 into our state, is both unconscionable and a violation of federal law. This must be stopped now to avoid a dangerous humanitarian crisis for the immigrants and the people of Arizona.”

COVID-19 and other diseases are coming to the homeland, and Biden does not care. All he wants to do is kick back and enjoy his rocking chair in the Oval Office.