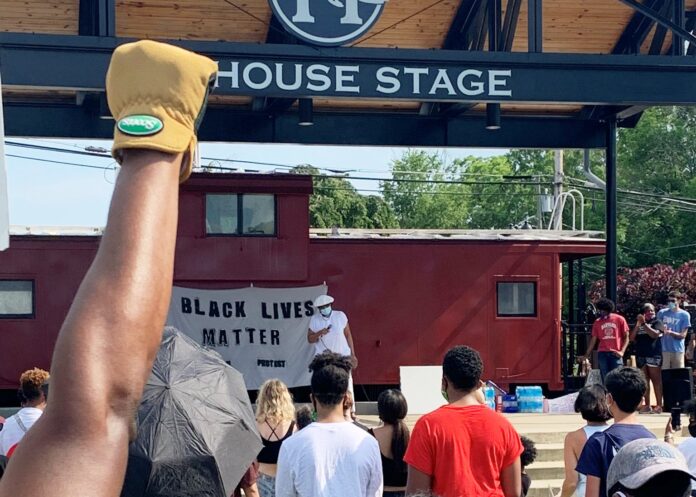 Black Lives Matter riots destroyed $1-2 billion in property nationwide, which were even more destructive than the Rodney King and Watts riots and were the most destructive riots in American history.

Black Lives Matter then raises money off of its flagrant crimes, tallying over $90 million in donations in 2020.

In Louisville, Kentucky, confirmed reports show that Black Lives Matter threatened businesses with violence and destruction of their property if business owners didn’t pay for protection, the same thuggish method of extortion used in protection racket tactics made infamous by the Italian mafia in America throughout the 20th century.

Martinez refused and Black Lives Matter destroyed his business, attacked his employees, and he had to close.

Martinez’s story is JUST ONE INSTANCE of Black Lives Matter’s terrorism and extortion activities in Louisville and across the country.

Black Lives Matter’s pattern of violence and extortion is happening across the country for all Americans to see. Collected together, conservative legal experts say that the evidence is sufficient for the federal government to prosecute Black Lives Matter under criminal conspiracy law and RICO statutes, and Black Lives Matter should be convicted for their crimes.

Instead of enforcing the law, Joe Biden and the Democrats are defunding the police as a political thank you to the Black Lives Matter crime syndicate.

Black Lives Matter helped steal the vote and now Biden is paying them off. The deal? Black Lives Matter gets to continue its criminal racketeering operation and President Biden gets to sit in the Oval Office and count his windfall from Hunter’s illegal family deals with China and Ukraine.

Does Joe Biden need to be impeached for his corrupt dealings with Black Lives Matter? Although difficult to isolate and prosecute, racketeering is a serious crime that Black Lives Matter is engaged and President Biden’s complicity further indicts him.

What do Black Lives Matter and President Biden also have in common? They’re both funded by CHINA.

The United States Justice Department needs to FULLY investigate the sources of funding for Black Lives Matter and their ties to the Chinese Communist Party.

It is recorded that the Chinese Progressive Association, an affiliate of the Chinese Communist Party, has directed substantial funds to a sister group of Black Lives Matter. The Radical Liberals in Black Lives Matter might call this financial misdirection “plausible deniability” but we know it is B.S. and just the latest way socialist progressives and cultural Marxists like Black Lives Matter are funding their illegal and radical anti-American agenda and hiding their pernicious backers, who include America’s enemies that want to sow chaos and destruction in our country.

If one thing’s for sure, it’s that China got their man in the White House. President Biden surrendered to China on Day One. China’s U.S. ambassador sent President Biden a Chinese finger trap and Biden hasn’t been able to get his fingers out of for the first 50 days of his presidency.

Whether or not President Biden is a trained Marxist or just controlled by one, Black Lives Matter is founded in the destructive, anti-American ideology of Marxist deconstructionism and radical gender theory.

Black Lives Matter founder Patrisse Khan-Cullors does not shy from the fact that her terrorist organization is founded in revolutionary communism. “We are trained Marxists,” Khan-Cullors admits.