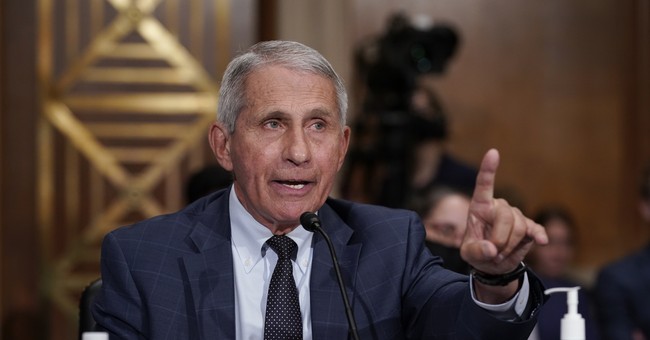 No one has lost more credibility over the last year or so than Dr. Anthony Fauci. Once lauded by the left and right alike (though, some of us saw through him as far back as April 2020), the good doctor is now widely derided as a political hack, and for good reason.

He lied about masks early on, claiming that he did so in order to protect supplies, but it’s his more recent lies that have really exposed his brazen nature. Recently, he told another whopper involving kids and COVID, asserting that we’ve never lost as many kids to the flu as we have the coronavirus. That, as Guy Benson points out with CDC data, is just completely false.

We’ve known since the beginning of the pandemic that children are largely invulnerable to COVID-19. Sure, there are exceptions, but there are exceptions to everything. As Benson points out, we don’t mask kids and keep them out of school for the flu despite the fact that the flu is factually more deadly. That’s because in both cases, serious outcomes for children are incredibly rare. Yet, Fauci can’t just be honest, perhaps because he feels it would undermine his fear-mongering narrative.

The NIAID head did the same thing a few weeks ago in regards to natural immunity. Despite the fact that we have numerous, extensive studies showing natural immunity is stronger than simply being vaccinated, Fauci lied by omission, claiming he wasn’t sure if natural immunity protected against COVID. Of course, he knew. There’s no way he didn’t know unless he’s just an absolute moron who shouldn’t be in his position in the first place. On second thought, perhaps the latter is applicable either way.

So why can’t Fauci stop lying? Some people on the right still seem to want to give him the benefit of the doubt as just misspeaking or being misinformed. Count me out of that number. I believe he’s a partisan hack who can’t help himself. He’s been working overtime to shill for Joe Biden since he was unleashed back in January. And while that was when Fauci dropped the pretext, he’s been a Democrat his entire life and actively worked to undermine the Trump administration. That’s why he can’t stop lying. It’s not any more complicated than that.