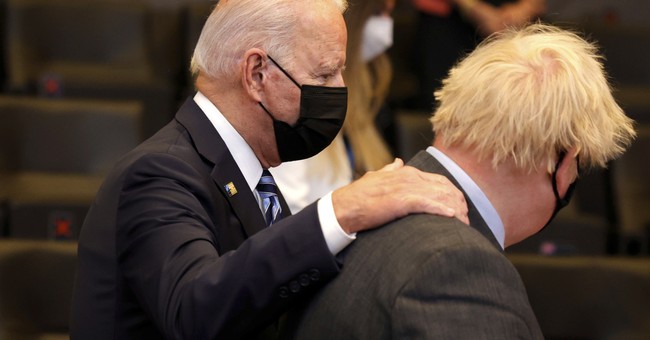 Joe Biden probably had more action today then he normally has to deal with — having to give a speech at the UN General Assembly and then later meeting with U.K. Prime Minister Boris Johnson to talk about the pandemic and trade issues.

The UN speech must have done him in because he was into la la land by the time he got to Boris.

Biden told Johnson a ridiculous story about his travel on Amtrak that has already been debunked as not being possible.

As I previously reported, the conductor he is referencing retired in 1993 and died in 2014. Biden didn’t actually hit over 1,000,000 miles on Air Force Two until 2015. So there’s no way this story could have happened. This isn’t just his typical lying puffery, this was weird straight up delusional nonsense. He’s just a pathological liar unhinged from reality. He also upped his number of miles on Amtrak which he said in May was 1,515,000 when he had the encounter with the conductor. Now suddenly, he told Johnson it was 2 million miles that the conductor told him.

But it really turned into bedlam when Biden’s staff flipped out trying to stop him from answering questions from the media.

Boris Johnson took three questions, according to CBS’s Ed O’Keefe. But then Biden’s staff started screaming right in the middle of Boris talking as they tried to stop reporters from asking Biden questions.

It was wild, I don’t think I’ve seen anything like it. And they were screaming very loudly, trying to get all the reporters out of the room.

Now perhaps it was because Biden started going into that nodding thing that almost looked like he was falling asleep. Or again, it’s just a sign of what we reported on before — erecting that “wall” to prevent him from getting any questions that he can mess up and avoid his regular gaffes.

But the staff created their own issue, causing a chaotic scene, on top of being rude to the prime minister.

O’Keefe was later able to figure out what Biden said in response to the border question.

If that’s Biden getting on board the fake Border Patrol whipping Haitians story, then he’s pushing something that’s already been debunked and it’s something done under his administration. What he needs to justify and resolve is the huge crisis he’s let fester at the border. That’s real and that’s all on him.