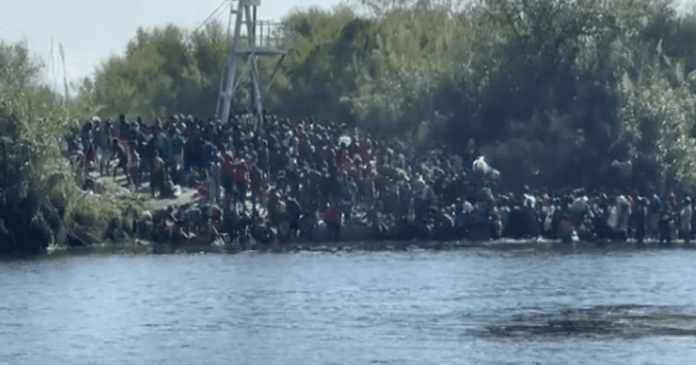 We’ve been reporting on the massive illegal alien influx in Del Rio, Texas, that basically had been overrunning that area and was out of control. The CBP was unable to deal with it. There were reportedly over 14,000 people under the International Bridge, setting up shacks made from the surrounding branches and greenery.

The Biden Administration may have started this surge to some degree, by stopping deportation flights of Haitians after the earthquake in Haiti on August 14. Now, they have started them again. They also suggested they might ship some people to other processing areas that were not as overwhelmed.

But fortunately, the flow has finally stopped — while Joe Biden is off at the beach and Kamala Harris was flipping a coin at a college football game.

So, how did it happen? Not because of anything that Biden-Harris did.

The reason why, according to Fox’s Bill Melugin, is Gov. Greg Abbott and the Texas DPS. The Texas DPS came out in force, with hundreds of their troopers providing a physical deterrent and preventing people from coming in.

But, here was what it looked like after Abbott surged the DPS to the area.

The effort, called Operation Lonestar, is protecting Texas — and the U.S. — when the Biden Administration is failing to do so.

According to Melugin, the numbers which had been over 14,000 have reduced to over 12,000, because some of the people have been processed by the CBP. Also that they have restarted the flights to repatriate the single males back to Haiti, although they are going to allow the family units — women and/or children — to stay. Why only the males is not clear. Basically, the women and children are just going to be released into the country, with a notice to appear.

Texas and Gov. Abbott stepped up here, basically because they had to in the face of the Biden Administration failing to do their job. But they shouldn’t have had to do this — protecting the border is the responsibility of the federal government. The CBP was doing all they could, but they couldn’t deal when they were completely overwhelmed — and Biden would have continued to leave the door open. Texas should send the bill for all their efforts to right to Joe Biden’s desk.