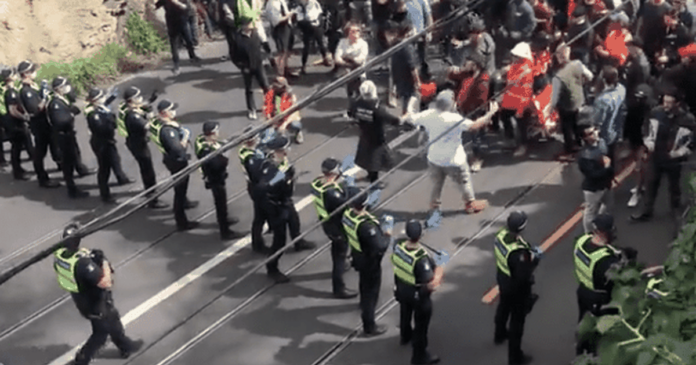 Hundreds of people came out in force today in New York City to march against vaccine mandates in regard to COVID.

“We will not comply!” They chant in midtown Manhattan, in Times Square.

Then of course, now for the third weekend in a row, we have the new, popular chant, “F**k Joe Biden!”

It’s really something to see that level of commitment in New York City, the liberal mecca. But it’s because of Mayor Bill DeBlasio’s vaccine passport requirement to get into some businesses, and the requirement to be vaccinated to be able to perform some jobs like teaching. We saw teachers out marching earlier in the week.

But as far along as New York City is, Australia is much worse. They have such severe lockdowns and restrictions, they even have quarantine camps, where people are locked up for violating restrictions.

As we previously wrote:

They’ve closed their borders and prevented travel between states. The Premier of Victoria has made it clear they are going to force you to be vaccinated or you will be “locked out” of society.

Places like Melbourne, for example, have a daily curfew, currently from 9 p.m. to 5 a.m., and residents are only allowed to leave their homes within a five-kilometer radius for a limited time to buy food, provide care, exercise, or attend approved work that requires permits. If you break it, you can be arrested. One woman was arrested for simply planning a protest of it, not even doing the protest.

They’ve even locked down entire apartment buildings, if one person gets sick.

Apparently the folks in Melbourne couldn’t take it anymore. Hundreds of them came out in the streets, although protests are forbidden. Free society? Australian officials seem to have forgotten all about those things.

Then police have the people trapped on a gorge road. But not for long, when the crowd just stampedes right over them.

What happens when the government has pushed normally law-abiding people much too far, completely abridging their basic freedoms? This is what happens, and it’s likely just the start. It’s likely to get even crazier there, as people let the government know that they’ve had enough.