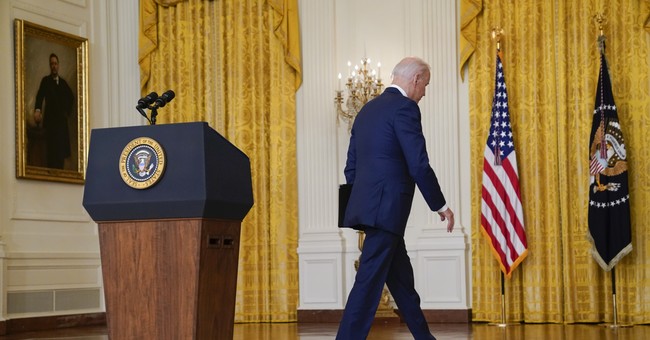 We reported earlier about the escalating border crisis.

There were, last night, 10,503 people under the International Bridge in Del Rio, Texas. But as Fox’s Bill Melugin is reporting, 10,000 more are coming.

Many of them are Haitians who had to have been trafficked to the Mexican border point.

The Biden administration has completely given up on doing anything about this crisis, despite the fact that local Democrats like Del Rio Mayor Bruno Lozano, who is a Democrat, have been desperately asking for help for months. Notice how he’s not just tagging Biden in his tweet but he’s tagging every media outlet to get them to report on this and get some action.

That’s not to mention that in August, there were over 208,000 illegal alien apprehensions, 317% higher than in August of last year.

So, is the Biden Administration listening to Lozano’s call? What’s his response? To ban Fox drones from shooting video of the disaster so you can’t see from the air how huge the numbers are and what a problem it is. If you’re not able to see it, it’s not happening, right? Talk about a Stalin move — that’s one right there.

But that’s not the only crisis underway. Remember the planes that were stuck in Mazar-i-Sharif waiting to evacuate Americans being held hostage by the Taliban? The planes and the people are still there, the administration hasn’t gotten them out yet and it’s been weeks now.

While some Americans got out aboard two flights this past week from Kabul, the Biden team have avoided saying what is happening with the people behind held hostage in Mazar-i-Sharif. Meanwhile, the national media has mostly stopped even talking about them.

On Wednesday, State Department spokesperson Ned Price claimed that they had “pulled every lever available” but the Taliban still refuses to allow the flights to leave the ground.

“I am not aware that any international flights, charter flights or otherwise, have left Mazar-e-Sharif. Of course, we have had a couple charter flights from Kabul International Airport that departed last week, including with U.S. citizens onboard,” he said.

“I know that the Turks and the Qataris, and if you listen to what the Taliban are saying publicly, the Taliban as well want to see not only charter flights, but normal commercial activity resumed at Kabul International Airport on an expedited basis,” Price added. “And it’s our hope that that will be able to happen in the not-too-distant future so that in addition to the charter flights that our Qatari partners have very generously administered to date, there will be additional options for individuals to leave from Kabul International Airport. So we will continue to work on this, just as we continue to work on these overland routes as well.”

Price then tried to move off the issue, but the reporter wasn’t having it.

“Sorry, what is the problem in Mazar? What’s the hold-up? Is it the same issue? I mean, we talked about documentation; you guys said that it wasn’t an acceptable reason, given the circumstances, to hold the flights. And then just nothing?” the reporter asked.

“We have been very clear that the individuals who have expressed a desire and a willingness to leave via Mazar-e-Sharif should be allowed to leave the country. There – the fact that to my knowledge a charter flight has not departed Mazar has nothing to do with anything that the State Department has or has not done, and in fact, quite the contrary,” Price admitted.

“The State Department, as we have said, has pulled every lever available to us,” he said. “We have gone to extraordinary lengths with not only our engagement with the Taliban, but also with these other constellation of groups on the ground and operating from afar, and also with countries in the region. And to our minds, these flights, these individuals, there is no reason they should not be able to depart. And that’s what we’re continuing to focus on.”

“I said we’ve used every lever we’ve had in the narrow and specific issue of charter flights leaving from the Mazar-e-Sharif airport in northern Afghanistan,” Price added later. “The question of holding the Taliban accountable is a much broader question, it’s a much more strategic question. And we’ve talked about this before.”

So they’re still there because our leaders and the State Department are incompetent.

According to the Daily Wire, of the hundreds of Americans trapped, they only got out 21 Americans on the two flights that did get out from Kabul.

So what’s Joe Biden’s response to all this, not to mention all the other things he’s left in horrendous condition?

He’s already out the door today, off to the beach for a long weekend.

White House Press Secretary Jen Psaki has also blown off her daily briefing today because of Biden going to the beach.

They really don’t give a darn about Americans. They show it over and over again, just like this.