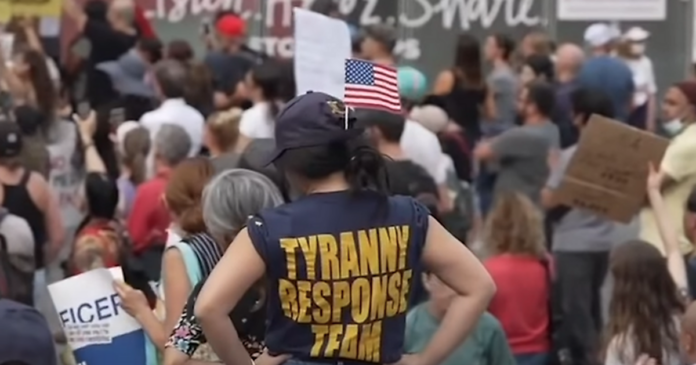 We’ve been covering the “F Joe Biden” movement, with people chanting against Biden at things like football and baseball games over the past two weeks. The protests have also been out against Biden wherever he has been going. We wrote about the protests against him in Idaho and California. Then there was a protest in Colorado, where Biden also tilted at a windmill and scared a baby.

The anger against Biden includes his vaccine mandates and his administration’s debacle in Afghanistan, among other issues.

But, there was one massive protest earlier this week that I didn’t want to miss out on reporting. For some reason, and I guess we know why, it wasn’t covered by a lot of the media.

Hundreds came out in very liberal New York City for a “Freedom Rally,” not only protesting vaccine mandates, but also chanting against Joe Biden. What’s more amazing is that the protest was organized by teachers — specifically, Teachers for Choice. The group includes current and retired teachers, staff, parents, and others.

While it was aimed at Mayor Bill de Blasio’s state-based dictate that everyone employed by the Department of Education had to get vaccinated by September 27, they seemed just as mad at Biden for his federal mandates. When you get that many people out in NYC, you know that there’s something going on, that people aren’t on board with these dictatorial ways.

“F**k Joe Biden,” they chanted as they walked across the Brooklyn Bridge and chanted against mandates. Some also had signs “Last years heroes, this years unemployed,” “My body, my choice,” and “I call the shots.”

Remember, this is supposed to be the guy who got 81 million people out to vote for him. He’s going to find a lot of folks out and voting against him — effectively by voting against Democrats in 2022.

“I have lived and worked in this city as a civil servant for 28 years of my life,” retired teacher Amy Carroll told PIX11. “I should be able to make my own health decisions and make a decision that doesn’t affect my employment that doesn’t affect my right to go to a restaurant, or a Broadway play, a museum.”

Her husband, retired teacher Bill Carroll, added: “I think what they’re doing in America, they’re taking away our rights about all decisions, medical decisions, we’re standing here we’re letting the government take over everything.” [….]

“I came with a bunch of teachers from a school in Whitestone, Queens,” teacher Alycia Morell added to PIX11. “We’re here because of the mandates, some of us are even vaccinated, but we’re fighting the mandate and we don’t want the children to have to be mandated for vaccines — so we’re fighting for everybody not just ourselves.”

The Teachers for Choice group said they would be suing the city to stop the mandate.