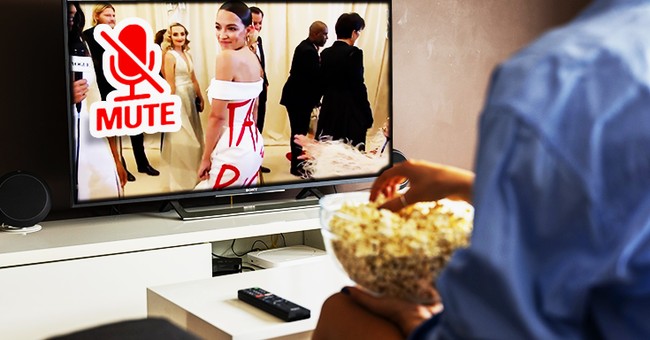 As the press fawns, AOC is approaching a level of self-parody.

The annual Met Gala returned this year and it was every bit the ludicrous affair that it always has been. It was choked with not just garish but insipid fashion choices, thirsty self-involved celebrities, and a press corps covering it all as if it were not simply a stunted hoedown filled with carnies on a much larger scale budget.

The big takeaway was Alexandria Ocasio Cortez peacocking on the red carpet in a white mermaid gown with bold script that said “Tax The Rich” on the back. It is clear this was a desperate move on her part, by wanting to partake in this cotillion of the elites while preserving her “support for the little people” street cred. “See guys, I am one of you by sticking it to the man — as I sip Boerl & Kroff while dining at a $250,000 table.” She claimed to have punctured the 4th wall of excess and spectacle with her appearance, all while indulging in the excess, and she was feted by the press as they declared her to be a fashion icon for her bold choice. Seriously.

As has been pointed out, Antoinette Ocasio-Cortez was so tone-deaf with this stunt she requires a Miracle Ear, but even beyond the obvious hypocrisy of appearing at an event so elite only 1% of the one-percenters were acceptable to attend, she managed to step on her tongue in a few ways in explaining away her stunt. She of course plays the victim in the aftermath, claiming she was attacked in the form of body-shaming, or somesuch complaint.

I and my body have been so heavily and relentlessly policed from all corners politically since the moment I won my election that it’s kind of become expected and normalized to me.

This is the woman who used her body as a billboard for a political cause. She had a slogan emblazoned across her backside, requiring that gazes fall across her form in order to have her message delivered. Now she is taking on the role of an objectified victim. This trends right into that dichotomy we have seen from feminists in recent years; a performer can writhe onstage in exposing fashions and she will be called an example of female empowerment, but the moment a male appreciates the visuals he is a sexist predator.

This is AOC demanding we look at words scrawled across her ass and then cattily sneering, ”My eyes are up HERE!” These are hardly the only objectionable moves by her.

She struggled to explain how her message on behalf of the downtrodden was legitimate considering it was delivered via a high-end fashion designer’s ball gown, one costing $3,000. She also was at the event that carried a $30,000 ticket price, possibly in violation of gifting laws applied to politicians. While this is unlikely to stick, she still waved it off by stating how the dress was on loan, and she was an invited guest to the function. No surprise to hear this from the former bartender on a government salary who inexplicably has two expensive residences and tools around D.C. in a luxury Tesla; her receiving a borrowed gown and a comped ticket to a free dinner is completely on-brand for Alex From The Bronx.

AOC also tried to justify her gown selection by stating how she was actually supporting the designer, Aurora James. As AOC described her, James is “a sustainably focused black woman immigrant designer.” Well, we have to buy into the immigrant designation if that applies to someone from Ontario, Canada. So like many of the other attendees, she was sporting foreign fashions at the event with the theme “In America: A Lexicon of Fashion.”

Note how in every picture of AOC’s gown she is seen without her safety mask. Not only is this in defiance of New York City’s newest mask ordinance, but it is also in violation of Alex’s own pledge. She said months ago that as the mask orders were coming down that she would not be changing her desire to wear a mask. “NYC got hit so hard that I think some of us are going to take time adjusting as we feel comfortable. Personally I’m going to keep wearing my mask in shared indoor public spaces like elevators, subway, grocery store, etc.”

Just not at opulent mega-star events with the millionaire set. Also worth pointing out is that in all of the glamour shots from The Met you’ll see AOC posing and beaming radiantly, as the help in the background were required to mask up. Life and death COVID safety measures are only for the rabble.

But AOC cares for the little people – if you listen to her speeches, she is heartfelt about the plight of those working-class types; just don’t follow her actions. For you see, as she expresses the right words claiming allegiance with the workers she is perfectly content to have them doting on her at these garish galas. Behold as she exits the event and has a team of workers carrying the hem of her dress on the way to her carriage to depart the affair.

And there is more. As she is touting the tired socialist ‘Eat the Wealthy’ messaging of taxing the rich, the event she attended was a charity function. These donations are used by her very targets as a form of avoidance of the confiscatory federal requirements, as the rich use such opportunities as a tax haven. This is something Benjamin Bronfman is surely familiar with. Who, you may ask? He descends from the Lehman family and is the son of former Warner Brothers CEO Edgar Bronfman, as well as a family descendant of the Seagrams distillery fortune. He is worth hundreds of millions of dollars.

He is also dating Aurora James, the woman who designed the Tax The Rich dress. To say this was all a posturing move for the sake of appearances is beyond a doubt at this point. But the media still swooned over the celebrity politician, which leads to another dose of misdirection. As her dress was criticized and pointed out in conservative outlets there was a backlash from some on the left and in the press.

Only issue, those on the right were not paying daily attention to AOC’s account and reacting the moment she posted pictures of herself in the dress. It was in reaction to the flood of media who were pushing out her appearance and lauding her for her bravery, and raving about what an iconic appearance it had been for her. This is outrage at a reaction, not the initial provocation in the press.

It is just a repeat of the same defense offered by AOC herself — the problem is not in her hypocrisy, it is in those on the right who noticed it.