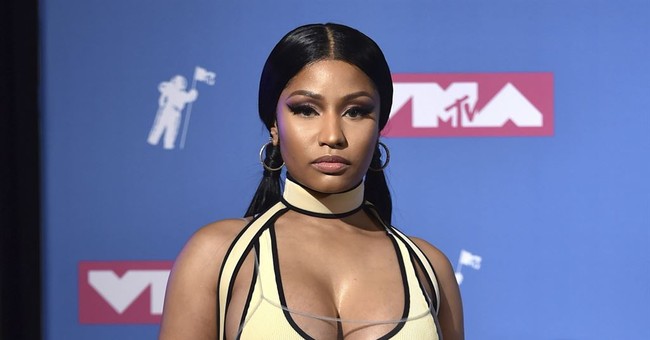 This is actually a pretty hilarious story. But it’s also a story of some bravery swimming against the liberal narrative in these times.

Nicki Minaj was embroiled with a controversy having to do with vaccines. Now, whenever anyone violates the current Democratic liberal mantra as to the vaccinations, you know that they automatically invite a lot of people from the left to come down on them. Even if it’s someone with 22 million followers like Minaj.

Nicki Minaj got a lot of heat when she tweeted that a friend of her cousin developed swollen testicles and impotence after getting vaccinated against COVID.

“My cousin in Trinidad won’t get the vaccine cuz his friend got it & became impotent. His testicles became swollen. His friend was weeks away from getting married, now the girl called off the wedding. So just pray on it & make sure you’re comfortable with ur decision, not bullied,” Minaj tweeted.

Then she tweeted that she would only get vaccinated once she had done enough research. She recommended people wear masks and get shots if they had to for work. She said she wasn’t going to the Met Gala (the same event at which Rep. Alexandria Ocasio-Cortez (D-NY) wore her “Tax the Rich” dress) because she had a baby at home and wasn’t going to public events. The Met Gala also required people to be vaccinated to attend.

MSNBC’s Joy Reid tried to take her on, but it didn’t end well, with Minaj calling her an “Uncle Tomiana.”

Then Minaj called Reid a “lying homophobic coon” referencing the scandal where Reid made homophobic comments on her old blog. Reid made up some ridiculous nonsense about being “hacked” and MSNBC never held her to account for the comments. Minaj also pointed out Reid’s own questioning of the vaccine last year, under Trump.

Now, all of that had already gotten her a lot of negative attention. But when she tweeted comments that Tucker Carlson made about her tweets, that’s when they really went wild. She posted it with a bulls-eye because Tucker said what Democrats/folks on the left were upset about really is the last part of her statement — “just pray on it and make sure ur comfortable with ur decision, not bullied.” The media and officials make their living from bullying people, Tucker said, so “they couldn’t let it stand.”

When folks on the left then attacked her, or lied and said that Tucker Carlson was a racist/white supremacist, Minaj just leveled them, too.

Oooh, sounds like she’s just eviscerating that whole you have to keep in line with the Democratic narrative explicitly. She’s really not going along with it. The left will doubtless now try to cancel her. But that’s going to be pretty tough, she has a pretty big platform.

She then further attacked this cult-like party behavior, calling it “brain dead.”

Who would have picked Nicki Minaj as a courageous champion of freedom and rights on their bingo card? Good for her!