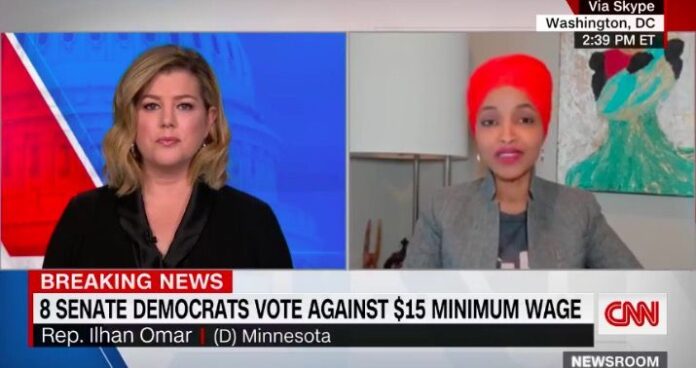 This is the last headline that the Democrats wanted to see after spending all of their time hammering the COVID-19 relief bill through. The Democrats should be rejoicing over all the hard work that they put in but that’s not what is happening at all. Omar’s not pleased about the income caps that were placed on the stimulus checks.

Centrist Democrats like Joe Manchin were very concerned, as they did not want to see anyone get paid who did not necessarily need the money. The phase-outs were supposed to begin at $100,000 or less on income and couples who are making at least $200,000. In order to appease the centrist Dems, these amounts were taken down to $75,000 and $150,000, respectively.

Hard caps have now been added, too. Senate Democrats are ensuring that individuals who made $80,000 and couples who made at least $160,000 are not receiving checks. “Omar seemed to be referring to numbers from the Institute on Taxation and Economic Policy, a left-leaning think tank. An analysis by the group estimated that under the Senate package, 11.8 million fewer adults and 4.6 million fewer children would be able to obtain direct payments than would have been able to under the House’s version,” Fox News reports.

16 million people that received a check the last time will not get one. It’s easy to see why this upsets Omar. The Democrats are allowing themselves to be outflanked on this issue by the Republicans. For all of the whining and crying about the Trump administration, they will have put more money in the hands of the American people by the time this is all said and done.

For the party that pretends that they have working-class interests in mind, this is more than a little embarrassing. Omar knows that they are going to get pummeled in the midterm elections now. For once, we can actually understand where she is coming from. On the other hand, we can also see where Manchin is coming from on this one.

If the vaccinations continue at their current pace, we may reach herd immunity by summer or fall. Manchin knows that we are in the final leg of the pandemic and he is trying to avoid too much unnecessary spending. That makes sense to us but that’s not what the Democrats wanted to do. They wanted a bill that allowed them to spend as much as they felt like.

The hiring frenzy that is about to take place should ease a lot of worried minds. Congress also has the ability to address the issue if we are still struggling later this year. In the meantime, most of us are hoping that this is the last round of aid that is needed. This isn’t because we wish to deprive the American people of what they truly deserve, it’s because we are hoping for a return to normalcy as soon as possible.

More aid packages would mean that we have yet to achieve that goal and no one is looking to go back to the table if we don’t have to. Manchin may have done some pouting but the package went through as planned. Biden asked for $1.9 trillion and that is precisely what he got, minus a few minor concessions here and there.

“I see it as a really disappointing development. We obviously are now ultimately sending money to less people than the Trump administration,” says Rep. Ilhan Omar on Covid relief.

“It is a failure when we compromise ourselves out of delivering on behalf of the American people.” pic.twitter.com/MM8NAykxNk

Omar should count herself lucky. If the election wasn’t successfully stolen away, Mitch McConnell would have maintained his majority leadership. We all know that he never would have allowed a package this size to be approved. The Democrats had their shot and they took it. Now that they have given out the aid and successfully been able to vaccinate a sizable amount of the country, they may be in better shape for the midterms than we originally thought.

Omar is forced to complain about compromises because she needs to look good to the progressives. The Squad is not going to tank the bill or tamper with it once it reaches the House, of course. She just needs to go on record as having complained about it. Manchin is going to be the lightning rod that takes all of the hate here, even though he tried his best to behave responsibly.