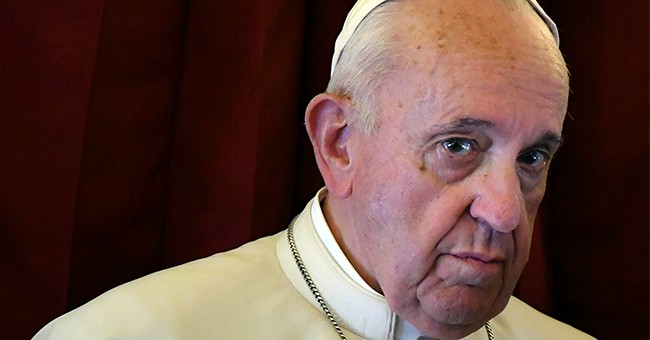 On Wednesday, Pope Francis reiterated his stance on abortion.

Therefore, he said, the Catholic Church will remain firm in its stance on the issue.

On a plane returning from a four-day trip to Budapest and Slovakia, the Bishop of Rome took questions from the press.

As reported by the Catholic News Agency, he spoke of respect:

“Abortion is more than an issue. Abortion is murder. Abortion, without hinting: Whoever performs an abortion kills. You take any embryology textbook of those students that study in medical school. At the third week of conception, at the third, many times before the mother notices, all the organs are already there. All of them. Even the DNA. […]

“It’s a human life, period. This human life must be respected. This principle is so clear.”

It’s not been so clear to some parishioners in Washington.

Take, for example, the Leader of the Free World.

“[W]omen’s [rights] and women’s health are under assault like we haven’t seen in the last 50 years. And we’ve seen state after state — including Georgia — passing extreme laws in clear violation of constitutional rights protected, including Roe v. Wade. And some have gone so far…to deny even any exceptions for circumstances that would involve the right of a woman to choose. And it’s clear that these folks are going to stop at nothing to get rid of Roe. And it’s clear to me that we have to…be just as strong in defending it. I support Roe. I support a woman’s right to choose under that constitutionally guaranteed provision. And, quite frankly, I always will. ”

His views appear to have evolved:

In 2012, he accepted the Church’s position “personally.”

The same can’t be said professionally:

He recently commented on the Texas heartbeat law:

The President’s also into palmists:

Back to Pope Francis, he offered particular challenges to any who oppose the pro-life position:

Even so, Joe Biden has a fellow committed congregant on his side:

Even so, what constitutes life remains the same.

And the leader of the Holy Church remains clear on it.

Another Comedian Takes a Stand Against Vaccine Mandates, Is Willing to ‘Sacrifice a Lot of Money’