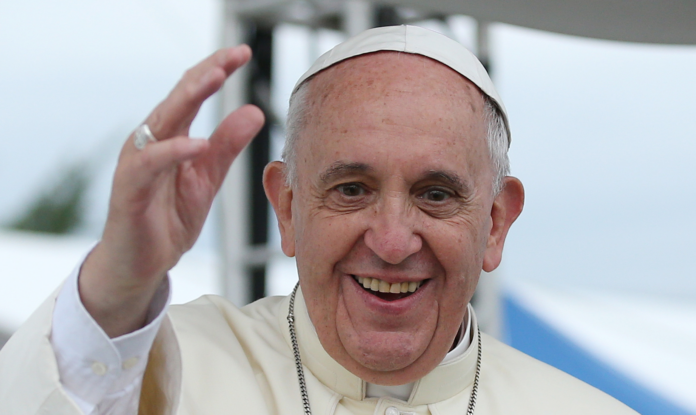 History is being made at this very moment as for the first time since Adam ate the apple, Iraqi Muslim leaders are pow-wowing with the King of the Catholics.

Pope Francis was asked by Iraq’s dwindling Christian population to intercede with the leaders on their behalf. Due to years of war and persecution, particularly at the swinging swords of ISIS, hordes of Iraq’s Christian citizens have fled the country. The bulk of them scattered throughout Europe.

In a show of good faith, Pope Francis’s motorcade was escorted inside Baghdad’s heavily fortified government Green Zone by horsemen holding both Iraq and Vatican flags. Once arriving at the presidential palace, a band struck up the Iraqi and Vatican anthems as President Barham Salih warmly greeted the visiting dignitary. Both of the men work masks.

Amid Iraq losing its battle with the flourishing coronavirus, Pope Francis was advised by public health officials against making the journey. Francis, as well as his accompanying entourage, have been vaccinated. Nonetheless, against all warnings, the Pope immediately began shaking the hands of other officials who were there to greet him, some wearing masks, some not.

The Vatican had been assured that the strictest of health measures would be adhered to, but this was not the case. The crowds of citizens who turned out to greet him were all bunched together and the better portion of them were bare-faced.

Salih said the Pope’s willingness to disregard health and security concerns over the importance of the meeting, “doubled” the value of his journey and gave better purpose to the meeting’s intent of improving Christian/Muslim relations.

Due to extremism and regional tensions, Salih expressed his concern over what he called a “crisis of coexistence.” His desire is for the 2000-year-old Iraqi Christian community to dwell harmoniously among the Muslim population, stressing how the community plays an important role in the history of their culture.

“The East cannot be imagined without Christians,” Salih said. He warned how their dwindling numbers could have “dire consequences.” He threw his entire support behind establishing a proposed Abraham House for Religious Dialogue. The patriarch Abraham is in the writings of Judaism, Christianity, and Islam, so it’s appropriate.

Iraq’s Christian population was in the neighborhood of 1.5 million prior to the 2003 U.S.-led invasion and the endless years of chaos that followed. As a result, their current numbers are down to only a few hundred thousand.

Pope Francis rolled down the window of his car to wave at some of the hundreds of people who gathered to greet him as his motorcade rolled through Iraq’s capital.

Iraqi citizens had no problem with the Pope coming to town. In fact, hundreds of thousands of them lined up along the road leading to Baghdad’s airport. They were waving Iraq and Vatican flags and letting him know he was welcomed. At several points, the Pope rolled down his window to wave back at the crowd.

It’s ironic how this same road was at one time the scene of countless deadly attacks. But since officially claiming victory over ISIS in 2017, Salih hopes to show the Pope how increased security measures have brought peace and stability to the once war-torn nation.

Is life beginning to turn around in the Muslim nation of Iraq? Will the millions of Christians who fled persecution return? And if so, what will they return to? Many of them lost everything they had, including their homes which were demolished.

Many of the Christians who fled are leading much better lives than previously. They’ve adapted to new ways and new cultures. Their children are attending good schools. But their biggest caveat is being able to worship without fear of being beheaded in their front yards.

As history has revealed time and time again, what might be a peaceful Muslim nation today, surely will not be tomorrow. The entire region has been this way since the dawning of time and it’s doubtful this will ever change.

So while we commend Pope Francis on his visit that may for a short period bring peace to the remaining Christians in Iraq, it’s doubtful many of them will return. They too are aware of the regions history.