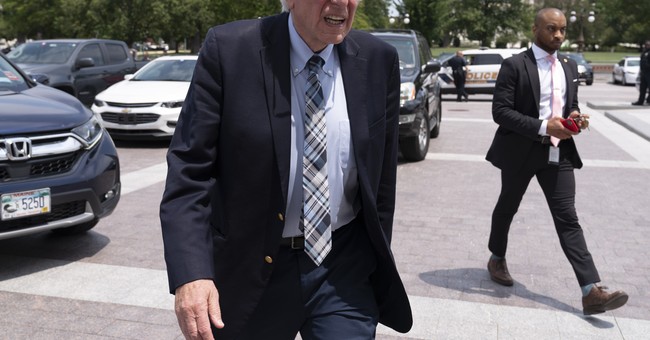 Senator and repeated Presidential hopeful Bernie Sanders wants all of America to know that the bipartisan infrastructure bill in Congress and the reconciliation bill, are linked and that one cannot pass without the other. He wants us all to think that and he wants us to believe that he is about to fight to make sure it happens like that.

Except… he has already voted with the rest of his colleagues to pass the bipartisan bill, an act that pretty much tells us that they aren’t actually linked, because he didn’t fight to tie them together at the time. He’s just saying words now because he wants the political fight to continue.

And, you know what? Even if they are linked and the reconciliation bill not passing means both fail, then that’s a win for America.

This bit of rhetoric comes from an interview Sunday on State of the Union.

Sanders sounds like he is claiming both bills are so inextricably linked that you can’t have one without the other, and it sounds almost like he’s threatening the failure of the bipartisan bill if the reconciliation bill doesn’t pass.

It’s a pretty empty threat, though. The roughly $1 trillion bipartisan bill passed the Senate as of last week, and Sanders voted in favor of it. At this point, there’s really no way for him to follow through on this rhetoric because his vote has been cast, and it was cast without both bills going through.

Of course, he is getting praise from the far left for his statement, as is expected from his natural fanbase, but that’s just a sign that they are once again falling for the scam. Sanders is promising the same bill of goods he always is, but he has no way of actually delivering and he will never be in a position to deliver on them because a bigger chunk of Americans opposes it than are for it. But the far left is so happy with his words that they aren’t letting the fact that his vote last week pretty much nullified the rhetoric from yesterday.

And if Biden were in a position to derail Joe Biden’s last major legislative agenda, well then full-steam ahead, sir. The bipartisan bill is a travesty of unnecessary spending from an incompetent government that gave us hits like the continued lack of federal funds to southwest Louisiana from last year’s hurricanes, no enforcement of rental assistance being distributed, the Afghanistan withdrawal, the still-sluggish economy, and the failure to stop COVID-19 as he promised he would during his campaign. If Sanders wants to stop that administration from being put in charge of another trillion dollars to screw around with, well I think I might be on Team Sanders at that point.

Sanders, however, has really shown just how empty a shell his far-left ideology is. He can’t force any change with it because, no matter what he thinks, Americans do not want it, and because his colleagues merely tolerate him for the extra vote in the Senate. He doesn’t actually give the Democratic party anything in terms of substance.

And, again: He lost to Joe Biden, who literally did nothing during the campaign and has managed to ruin everything he touches since he won. How bad must you be when you can’t even beat that?