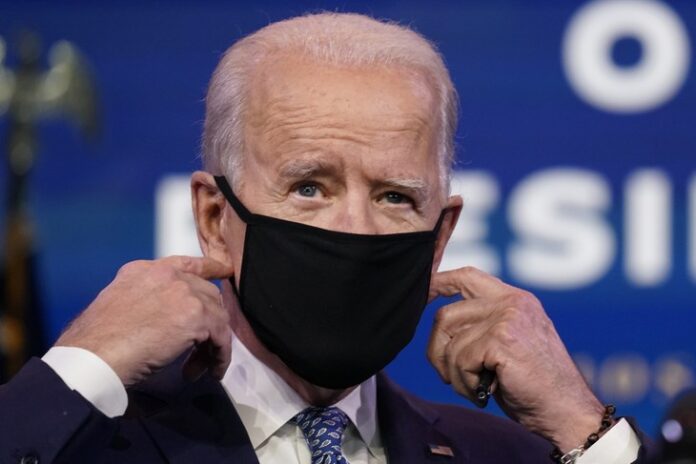 At the start of Biden’s reign of terror, some people cautiously put their trust in the man. He came out and told the nation that it would be 100 days before the masks could come off. But it did not take long for the lying president to take to the airways and give cryptic statements about when the masks would really be done away with. Now it sounds like he will require anyone he can force to wear them for an undetermined period of time.

An Islamic version of Joe Biden is the image that many across the country are beginning to see pictured as the usual way of operating in the country. But the vast majority of Republican-run states are laughing their heads off at a man that is clearly a year behind the reality of the pandemic.

Dozens of states have released notifications that mask mandates are no longer needed, and businesses and schools can now open up freely with no restrictions. Then there is Biden stuttering on the news, claiming that masks need to be worn for years to come. Or at least until he says they can come off.

The states that are opening back up are doing so because the data shows that the number of infections is dropping at an alarming rate. Just in Texas alone, they have seen the number of hospital cases drop to all-time lows. Their rolling case average of 10,000 is now under 7,600. That drop happened in the past two weeks alone.

The state of Mississippi is the latest state to throw out the lockdown restrictions and tell people that the end has come. Their governor Tate Reeves stated very clearly that “Today, I signed what I expect will be one of my last executive orders regarding COVID-19. Our hospitalizations have plummeted, and our case numbers have fallen dramatically as well. In fact, our case numbers have fallen to the point where no county meets the original criteria for a mask mandate. The only rules remaining in place will limit capacity of indoor arenas to 50% and rules governing K-12 schools.”

The excellent news is flooding the underground airways since the media will not report on the positive developments. Normality is within reach for everyone, but the issue is that the liberals do not want normal because they love the power they have to control people through fear.

And this is where Joe Biden comes into the dismal picture that he is trying to push on people. He loves power, and he wants to be able to tell people what to do with their health. The only way he can control people is to lie to them and tell them that COVID-19 is still around.

Bumbling Biden, when asked about reopening, stated, “I’ve been cautioned not to give an answer to that. My hope is that by this time next year we’ll be back to normal or before that — my hope. But it depends upon if people continue to be smart.”

Biden on when America might return to normal: “My hope is by this time next year” pic.twitter.com/id6S351IU1

He just called everyone stupid by insinuating that people are not smart enough to follow science. He must throw himself into that category because he is not following the science. And the rest of the country is opening up because they are the smart ones.

Biden is ignoring the successes of the states that have been open for almost a year. The states of Florida and Texas, and many others have opened their borders, and everything is just fine. No new outbreak or some variant is lurking in the corner.

But Biden went against his initial statement of “just 100 days to mask, not forever” speech and told everyone that they would wear a mask whether they like it or not. He is going to find out that not one governor is going to implement any idea that moves people back into the COVID dark ages.

People are a lot smarter and wiser than he gives them credit for. The liberal elite is not the smartest people on the planet like they think they are. They are part of the dumbest crowd ever to live. They think they have all the answers when all they really have is nothing at all. They are clueless.