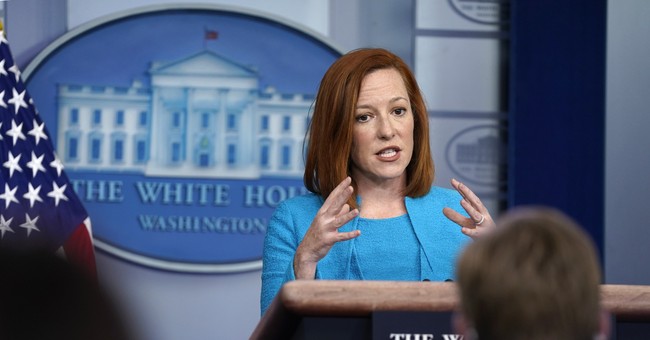 The contentious exchanges between Fox News correspondent Peter Doocy and Biden press secretary Jen Psaki are unquestionably the highlight of every daily White House press briefing for the conservatives who watch them, as we’ve documented extensively here. Doocy has a penchant for getting Psaki to make troubling admissions about the Biden administration’s policies and stances in a way that few if any other reporters can.

We saw it yesterday with Doocy’s skewering of Psaki on the issue of NSC spokesperson Emily Horne characterizing Taliban terrorists as “businesslike and professional” in a recent statement, and we saw it again today – not so much in what Doocy said but in the absolute daggers he shot at Psaki after he twice asked her why Biden was mandating the coronavirus vaccine for private businesses with 100 or more employees but not for illegal immigrants crossing the southern border.

Here’s how the exchange went down:

Doocy: “Why is it that you’re trying to require anybody with a job or anybody who goes to school to get the COVID-19 vaccine, but you’re not requiring that of migrants that continue walking across the southern border into the country?”

Psaki: “Well, look, our objective is to get as many people vaccinated across the country as humanly possible. And so the president’s announcement yesterday was an effort to empower businesses to give businesses the tools to protect their workforces. That’s exactly what we did. But certainly, we want everybody to get vaccinated, and [the] more people are vaccinated, whether they are migrants or whether they are workers, protects more people in the United States.”

You can tell by the transcript that she never answered his question and after the second try, she quickly moved on to another reporter, dismissing Doocy. The below video is the full clip of their back and forth, but it’s the shorter one below it which was aired on Fox News where you see the daggers Doocy shot at her as she moved on:

Watch this shorter clip all the way to the end and check Doocy’s eyes. Almost reminds you of the heat vision/red lasers Superman shoots in the movies. Doocy blinks a couple of times after in what was likely an effort to maintain his composure and to keep from actually shooting lasers:

In a prior piece, I talked about how sometimes in these exchanges it’s not what members of the Biden administration actually say that tells us something but rather what they don’t say that says it all.

In this instance, Psaki not only did not deny what Doocy asserted about the lack of a vaccine requirement for migrants crossing the border, but she studiously avoided the question and gave a canned answer instead.

Unvaccinated migrants can spread the coronavirus just like unvaccinated (or vaccinated, for that matter) workers can. So why aren’t they required to get vaccinated, too?

The businesses that are going to be hard hit with the costs of Joe Biden’s vaccine mandates (including the fines) and the employees who will be on the hook for some of the costs as well need to remember this going into next year’s midterms.