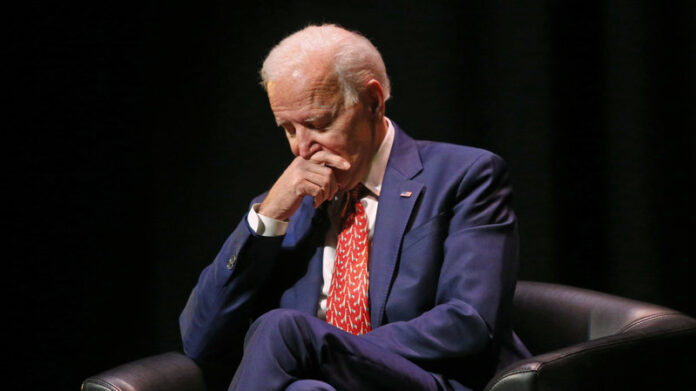 Joe Biden is bordering on being an invalid. It’s only a matter of time before he begins drooling at the podium. This wouldn’t be a problem if he weren’t the President of the United States of America.

Each time he gets in front of the American people, he squints a little bit more, he stutters more strongly, and he appears more and more confused. Yet, the Democrats continue to throw their support behind him.

When Biden flew into Houston to pretend as though he cared about the Texans after an unusually harsh week of winter, it seemed as though the president forgot everything – how to read, how to stand, or even why he was there.

There aren’t too many things that Biden had to do upon giving a speech. He had to thank a few people who had welcomed him into the fine city. This included several members of Congress, individuals he should know well.

He botched almost every single name. It’s Sheila Jackson Lee, not Sheryl and not Shirley. It’s also Lizzie Pinell, not Pinnell. Shouldn’t a president be briefed on what he is to read before actually taking to the podium and reading it? He was likely given a copy of the speech but his memory just can’t hold on for that long.

Instead of apologizing and showing a greater level of confidence to everyone watching, he actually paused and said, “What am I doing here?”

We’d all like to ask the same thing, Mr. President. What are you doing here?

The question could be answered in so many ways. There was no need for him to be in Houston to show support since the freeze was well and truly over by the time he arrived. Texas did what it does best – it fended for itself. As for being president, well that’s a mystery in and of itself.

The president shouldn’t be in a constant state of confusion.

The liberals swear up and down that it’s because Biden isn’t one for public speeches. After all, we heard all about the fact that he’s spent his entire life fighting a stutter.

Sure, okay. But, then, why is it that Kamala Harris has to remind our president to wear a mask, particularly when speaking with medical personnel?

When the president was at Eisenhower Executive Office Building, Harris had to ask him where his mask was. This is the same president who made it a requirement to have a mask at any federal building. He hasn’t even been the president for 100 days and he’s struggling with adhering to his own mandates.

There’s a reason why so many people voiced concerns over Biden’s mental health leading up to Election Day. He has shown on countless occasions that he gets confused. He forgets names. He forgets where he is or why he is there.

Regardless of his questionable mental status, he was elected and inaugurated as our president. At the very least, the liberals standing behind him should review things with him so that he can offer more confidence to Americans.

Instead, they shove him up to the podium and hope he doesn’t botch things too much.

The squinting and the stuttering are all too much. It’s clear that he doesn’t have the slightest idea of what’s going on. Yet, this is the man who can write executive orders to sign ideas into law for our country. This is the man who is going to negotiate with foreign leaders.

If the liberals thought that Donald Trump made us into the laughingstock of the world, they clearly have no idea what the foreign leaders are saying now. It’s only a matter of time before Biden forgets (again) that Margaret Thatcher isn’t the Prime Minister of the UK.