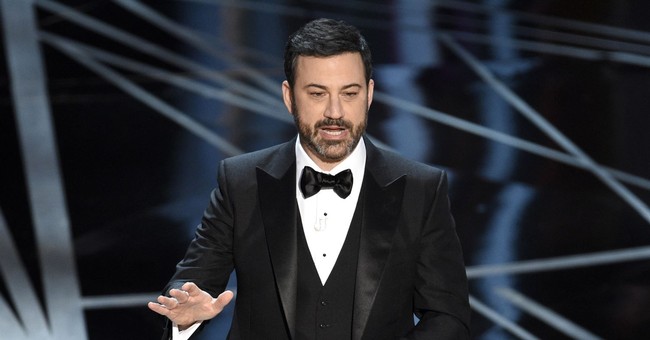 Jimmy Kimmel made a return to his late-night show earlier this week and opened things up by taking cheap shots at those who have remained unvaccinated against COVID-19.

Kimmel’s comments echoed many of the remarks we’ve seen from other loud voices on the left the past several weeks, with him repeating the same frightening talking point: You shouldn’t get ICU treatment if you are unvaccinated. The statement might come as a shock to those who remember Kimmel’s impassioned pleas to treat health care as a basic human right when it was the Democrats pushing for increased government control over the health insurance and health care industries.

It might not be as shocking if you remember that Kimmel’s career is shaped entirely by positions of convenience. He rose to fame with “The Man Show,” which closed every episode with the segment “Girls Jumping on Trampolines.” He became a late-night host and immediately hopped on board with the far-left talking points that Hollywood loves. And now he is reneging on his belief that health care is a fundamental right in order to join in with the crowd screaming about horse de-wormer and the unvaccinated rubes.

I flat out refuse to believe that anyone has a right to another’s labor (which is what claiming a “human right” to health care essentially means) and yet I am far closer to that political side than I am to any side that would claim a person’s vaccine status should determine whether or not they receive health care.

That is essentially Kimmel’s argument. He dressed it up a bit by making it about ICU patients, but the scorn with which he talks about the unvaccinated is the exact same type of disdain you’d hear some rich caricature talk about “the poors.” He very clearly thinks they are so ignorant that they aren’t really worth treating like humans at all.

And that… is basically what conservatives pointed out about death panels, isn’t it? That was something the left absolutely denied any and all existence of. It was the idea that someone in power has the authority to say who gets treatment and who is better off just dying? At the very least, it’s one of those tricky little slippery slopes, and it leads to the exact type of authoritarianism that the left constantly accused Donald Trump of flirting with. But say what you will about Trump, he did make the vaccines possible in the first place. Many of Kimmel’s pals on the left openly questioned the safety of any vaccine developed during the Trump years.

Do not get me wrong, either: I am 100 percent for the vaccine. I think everyone should get it. But I damn sure don’t believe that a person’s refusal to get it disqualifies them from health care. I don’t think you should condemn the unvaccinated to misery or even death because of their choice.

That is the mentality of Kimmel and the gang, though. They truly believe it’s okay to think health care is a basic human right unless you don’t take a certain vaccine. They would rather continue to play off the divisions in society rather than try to unite and encourage people to do what they think is the right thing.

But hey, as long as he can tell some half-assed cheap jokes on a pandemic that has killed millions, who really cares if it’s hypocrisy?