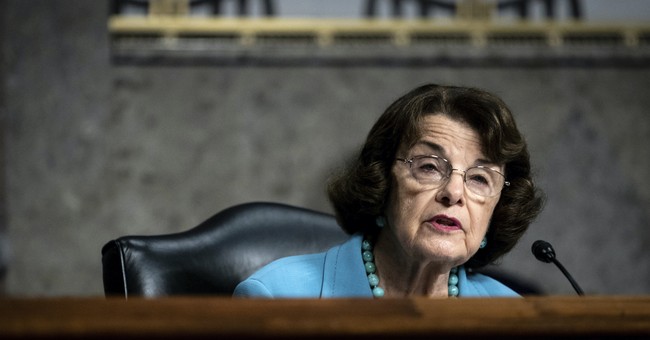 As the California recall election looms, Larry Elder has emerged as a leading Republican candidate. He is polling well among conservative and Republican voters, but a recent misstep by the conservative talk show host may have cost the recall some badly needed support.

Senator Dianne Feinstein (D-CA) has held her senate seat for nearly thirty years. Feinstein, 88, has not been seen publicly in weeks, and rumors of her mental state and even her death have been swirling. Although the longtime Senator has not been very visible recently, she did say earlier this year that she intended to serve another full term into 2025.

Whatever her stated intentions, the reality is that Feinstein is aging and quite possibly in poor physical and/or mental health (the fact that we are left to speculate speaks volumes). In a state that currently rides the razor’s edge of an official autocracy, open senate seats in between election cycles have typically been appointed by the sitting Governor. Even recently, Gavin Newsom appointed Alex Padilla to replace Kamala Harris when she accepted a position in the Executive Branch. It stands to reason that whatever happens with the Newsom Recall election, the Governor of California is more than likely going to have an open Senate seat to deal with at some point.

So it’s no surprise that Elder has been asked about what will happen with Feinstein’s open seat (if and when it comes down to that). He is a leading candidate, after all. However, Elder’s answer was disappointing for a couple of reasons.

Elder recently told Mark Levin that he would definitely appoint a Republican to fill Feinstein’s seat.

The public reaction was immediate. Internal polling on the “YES to Recall “question was rumored to have taken a huge hit. The sleepy Democrat voters who were planning to sit out the election were suddenly awakened. It’s one thing to recall a truly terrible Governor and risk turning that solid blue perch red. It’s quite another to risk giving up two important political seats in one election. It was a terrible miscalculation on Elder’s point and one he seemed to recognize immediately, particularly after the comment went viral, with coverage at popular outlets like The Hill and The Daily Mail. When pressed, Elder seemed to have shied away from expositing further on the issue. But the damage may have already been done, with Newsom now having a very persuasive talking point when trying to motivate indifferent Democrat voters.

The declaration wasn’t the only mistake Elder made, however. The true conservative response should have been a direct rebuke to the progressive swamp culture that saturates Sacramento. It’s tempting to want to play the corrupt game the California Democrats have put in place, but that’s a short term solution to a longterm problem, which is reestablishing republican principles in a blue state to rebalance the distribution of political power.

The truly conservative answer to the appointment question is this:

And yes, most likely the voters will choose another Democrat, but that’s the real bummer of freedom…people get to be free to choose poorly. It is up to Republican candidates, their party and their supporters to convince voters that they are worthy of holding that elected seat. It’s an uphill battle, but if we are true advocates for freedom, we must be willing to apply that freedom equally, even when it may not benefit our position. We are obligated to persuade, not wave our hands and give the voters what we want instead of what they want.

There actually is a Republican candidate in the race who has consistently touted the need to leave California’s national representation in the hands of the people. Assemblyman Kevin Kiley (R-Rocklin) is not just the only candidate with extensive (and current) experience in the capitol, he also happens to be Gavin Newsom’s own district representative (although it doesn’t seem likely Newsom is an enthusiastic Republican voter in that largely red district).

Every candidate who claims to hold to a conservative worldview needs to be taking the same position. Not only is it important messaging when it comes to gaining support from the plethora of Democrat voters who are keen to recall the current Governor but not so keen to be wrapping up a senate seat in the mix.

Governor Newsom has been enjoying a one-man man rule for far too long in this state. Regardless of party, we don’t need to replace one overreaching bureaucrat with another.

Catch up on the latest in the recall election here and be sure to subscribe to @Redstate on Twitter to stay up to date on all the latest in California recall news.