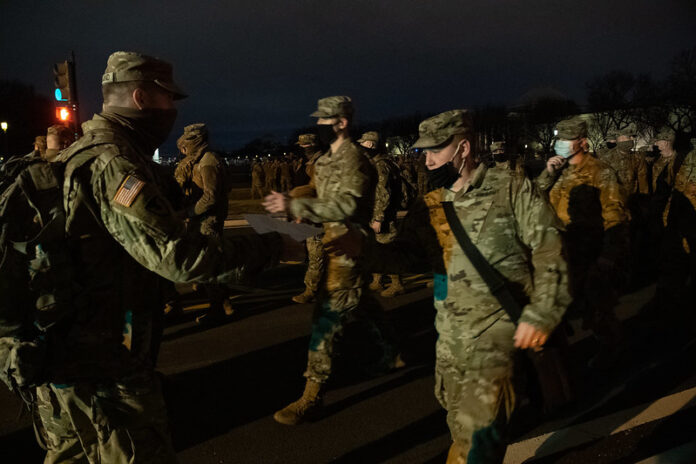 The National Guard was sent from all over the country to provide protection in Washington DC following the riots of January 6. They remained to provide added protection for the inauguration of President Joe Biden.

The problem is that was nearly two months ago. Why are the troops still there?

It costs money to keep the National Guard in place. They have to be paid salaries and be provided housing. Meanwhile, they’re kept away from their families and their full-time jobs.

And the troops are growing bored with it all.

When will the last of the troops be dismissed so that they can go home and resume normal life?

Thousands of members of the National Guard are still being kept in Washington DC.

During a February 23 hearing, Senator Rick Scott, a Republican out of Florida, asked why they were still there and if there was a security threat.

There was no response. This leaves the question of whether the Democrats even have a response. Is there a threat that they’re not sharing or are they starting to let their paranoia show?

Once Scott didn’t get a response, he asked, “Is that a no from everybody? No one has any reason, any idea why we have the National Guard here?”

It’s time to send them home, and Scott has requested that there be a serious evaluation to determine whether there’s any reason to keep the troops in place.

Biden’s inauguration made history with having close to 25,000 troops in place. However, since the riots on January 6, there’s been no security threat. If there weren’t events that warranted the troops for the inauguration, it should be an easy decision – send them home.

Yet, even as the U.S. has already spent well over $500 million for this added protection, the Biden administration finds it acceptable to keep spending millions every day.

Even after the impeachment trial, there were no serious security threats.

One guard member even spoke up to a reporter at Politico, stating, “This is not a ‘combat zone’ so combat conditions shouldn’t apply.” By driving through DC, though, with thousands of troops lining the streets, it appears as though it could be a combat zone.

The only thing that the Democrats have managed is to spend a lot of unnecessary funds and scare the locals into believing that there are more security threats to come.

Thankful for the @NationalGuard members keeping us safe. These brave individuals have been away from their homes & families for weeks. But no one from today’s @HSGAC hearing seemed to know why.

It’s time to reevaluate the rationale for keeping them in D.C. & get them back home. pic.twitter.com/Wjqh2LwHAo

Guard members are typically given a mission statement of why they’re there. They’re told of a defined situation that they are to protect against. They’re not given any of those. They’re simply told to be present – and with no plan as to when they’ll get to go home, it’s all very tiring.

Republican Senator John Kennedy has even raised concerns that there’s “razor wire, fences, barricades, Humvees, automatic weapons, and one point they had tanks.”

Wow. There’s more protection around the Capitol Building to protect Congress from eccentric Americans than there is at the US-Mexico borders. It shows where the priority is with the Biden administration.

Representative Adam Smith, a Democrat who is on the House Armed Services Committee, has said that close to 5,000 troops will remain at least until March 12. Although, he also states, “At this time I’m not aware of a threat that is out there.”

Well, the Democrats sure do know how to justify their use of excessive spending.

If the troops are to remain, they at least need to be given a mission and a clear date as to when they can expect to go home. Otherwise, it’s a waste of money and cruel and unusual punishment of the National Guard.