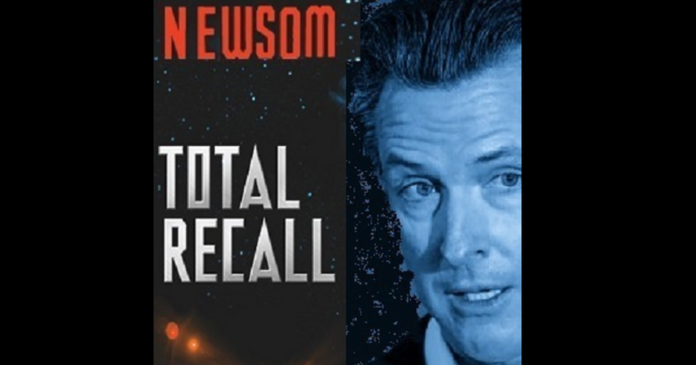 Welcome to Week 2 of Total Recall: The Countdown to the Special Gavin Newsom Recall Election. We are at Day 8. Just more than one week before that Special election date of Tuesday, September 14 arrives.

For those just tuning in, Week 1 is here: Total Recall: The Countdown to the Special Gavin Newsom Recall Election.

Early in-person voting started in certain parts of the State this weekend. Los Angeles County has 108 polling places, and more are expected to open leading up to the September 14 Special Recall Election.

Voters who need to find the location closest to them can visit caearlyvoting.sos.ca.gov. Early voting will run from 10 a.m. to 7 p.m. until September 13.

The multitude of legacy media articles are focusing on two polls that show Hair Gel beating the Recall comfortably. One of those polls by Trafalgar Group, a Republican-leaning outlet, had our Managing Editor Jennifer Van Laar raising some questions in Trafalgar Group’s CA Recall Poll Intentionally Excluded a Leading Candidate. The candidate the group excluded? None other than Assemblyman Kevin Kiley, who is very much still a strong contender in this race. However, the poll chose to include Rep. Doug Ose, who had suspended his campaign 10 days before the poll was processed due to his heart attack.

Yeah, they stepped in it. So much so, that they were forced to issue an update: UPDATE: Trafalgar Group Apologizes for Mistake in CA Recall Poll and Why a Retraction Matters.

Public Policy Institute of California (PPIC) is another respected “non-partisan” group, whose recent survey shows Newsom beating the Recall handily. It also has COVID as the leading issue affecting Californians. Maybe that’s true, but from word on the ground, we’re not sure that’s it.

The Associated Press decided to do an article about who has voted so far, and they found it is largely older Democrats. What do you expect when His Hairfulness is using as his surrogates Trotskyite Bernie Sanders (D-Get Off My Green New Deal), fossil Elizabeth Warren (D-Fauxcahontas), and Amy Klobuchar (D-Fading)?

No matter how much Bernie Bros. love Sanders, they are over Newsom after AB5. Young and hip Instagram Influencers are also encouraging their ranks to ditch Gavin and support Elder.

So, the progressive faithful and the unions are now Hair Gel’s biggest force, while the young people and the Latinos seem to be moving away from the party.

Jennifer Oliver O’Connell has interviewed Recall proponents and grassroots organizers alike, and they all are encouraging people to vote in-person and vote on Tuesday, September 14. We will see if the legacy press bothers to offer fresh numbers, or if they continue to carry water for their golden boy.

The Smell of Desperation

This hasn’t stopped His Hairfulness from taking advantage of candidate Larry Elder’s detraction from California issues by saying he would appoint a Republican Senator to replace Sen. Dianne Feinstein (D-Decrepit). There is also the recent Democrat outcry about the Texas Heartbeat law, and Elder has been all over that too. Pro-life Activist and Founder of Live Action Lila Rose says she extracted certain promises from Elder for her endorsement, as POLITICO operative Carla Marinucci tweeted:

Legacy media knew what to exploit, and now, so does Newsom. Listen to this pandering speech he gave at the Culver City event with Sen. Fauxcahontas:

Somebody get that man some sun screen and a cough lozenge.

Just like Hillary Clinton’s pantsuits, Sen. Fauxcahontas adores her blue top. The woman probably has 100 of them in her wardrobe for just such occasions. She was standing by Gavin’s side, so that women’s rights and children can be protected.

Democrat Recall Candidate Kevin Paffrath attempted to attend the event, and claims he was turned away.

Polls are showing “The Asians” are not that into removing Hair Gel from office, so His Hairfulness took some concentrated time over the past few days to pander. Newsom paid a visit to San Franciso’s Chinatown, with his Affirmative Action Attorney General Rob Bonta, who we have heard identifies as Asian. Bonta’s wife Mia just rode the Bonta coattails into his old Assembly seat.

Yet another reason that Newsom needs to be recalled: to put an end to this business-as-usual corruption of passing seats on to family.

Not much of a crowd, but whose counting?

And in case you didn’t think Newsom cared about the Black vote, he put in an appearance this morning at a GOTV drive in South Los Angeles’ Crenshaw district, organized by the usual SEIU soldiers, with the usual Los Angeles Black Democrat suspects in attendance: Rep. Karen Bass (D-Commie), and Assemblyman Reginald Jones-Sawyer (D-Seat Filler).

Not sure what hard decisions Bass was talking about, and it really doesn’t matter. At this point, if Newsom was doing as well as he thought in these polls, he wouldn’t be breaking his back to do this amount of pandering.

In more good news for the Recall…

As Jennifer Oliver O’Connell reported this morning in While Hostages are Held in Afghanistan, Kamala Harris Plans to Campaign for Gavin Newsom, VP McCackles arrives on Wednesday, and will campaign with Newsom in the Bay area.

The Biden-Harris administration wants Americans to forget there is a hostage situation in Afghanistan, so they think Harris going off to campaign for Newsom will do this. It’s not a good look, and it will backfire. We await Wednesday to see just how badly it does.

Dementia Joe is still rumored to be coming out as well, after he completes his “vacation”. <*wink* *wink*>

Another rumor had Hair Gel scheduled to appear in the Valencia, Northern Los Angeles area yesterday, but the event was abruptly canceled because a group of pro-Recall proponents planned to come out in full force to debunk his lies. Jennifer Oliver O’Connell hopes to have more on this later in the week.

And on to the top-tier Recall candidates:

Beyond some outdoor stuff in San Diego to talk about how what a wonderful job he did on homelessness, there is not much attention being paid to Faulconer since he and Caitlyn Jenner demanded Larry Elder step out of the Recall race. The politics of personal destruction doesn’t seem to be getting either of these candidates the attention they thought they’d get. Perhaps it is a new day.

Flailing at one percent in most of the polls, Jenner went on Fox News’ The Next Revolution with Steve Hilton to make her bid to Californians:

To continue to raise money for the campaign, Caitlyn Jenner is auctioning off the Wheaties cereal boxes from when she was Bruce Jenner…

The “Beast” is back on his Beastly Tour Bus, and going up and down the state, focusing on Safe Communities and Homelessness.

Since Cox is trailing just ahead of Jenner in some of the polls, he looks to be positioning himself for a spot in someone’s administration.

And at the top of the polls, Elder seems to now be taking the time to appear in front of actual Californians, as opposed to just his big money donors.

On Saturday, Elder attended a Rally with Asian-American Communities in the Orange County city of Westminster, then traveled due northwest to attend a Rally in Ontario. Later that day, he traveled to Oroville Dam with U.S. Rep. Doug Lamalfa (R-Butte), then attended another Rally in Durham, CA.

Today, Elder traveled back to Southern California, doing a morning Rally in the Northwest Los Angeles community of Castaic, and then traveling Southwest to attend a Rally in Thousand Oaks.

Elder has his infrastructure down, and is now getting help from some leading Hollywood celebrities, as well as conservative political cartoonists.

Kiley began Friday in Sacramento, then wended his way down South to spend the weekend in Southern California.

Before he flew down south, Kiley spoke at an Orangevale Chamber of Commerce Event in the Sacramento area. Then on Saturday morning, his first stop was at Historic Joseph Filippi Wineries in Rancho Cucamonga. Not quite the Napa wine cave that Pelosi and the Democrats like to frequent, but it was the perfect place for a campaign event and fundraiser.

Then it was off to nearby Riverside County, for an event at Dorry’s Bar and Grill at Tom’s Farms.

On Sunday, Kiley spoke at all three services at Godspeak Calvary Chapel in Newbury Park, did an afternoon meet n’ greet at Crazy Otto’s Diner in Valencia, and then went on to Ventura County to speak at Mrs. Olsen’s Coffee Hut in Oxnard.

This afternoon, Kiley will be at the Peppertree Cafe in Glendora, in the east San Gabriel Valley.

Kiley always does a spectacular job of explaining why he chose to run, and putting the focus on The Recall, and not just on himself as a candidate. Videographer Brian Vaccaro has been following Kevin Kiley since he announced, and tries to record him as much as possible. Vaccaro said,

“I figured it’s a good way for my 7-year-old son to get a lesson about how broken the system is, but what happens when one man with integrity stands up.”

What happens? Change, as well as History being made. This Recall Election is the evidence.

Listen to Kevin Kiley speak about the journey of the grassroots Recall effort and his focus, here:

History of the Recall–Why Kiley is the Grassroots Candidate

Why Kiley will Allow the Citizens of California to Pick their Senate Candidate: “This Election is about the future of California”

Kiley Presents his Philosophy on the Other Challengers in the Recall Race and Expounds on What a Recall is all About.

Eight more days. We are here for it.