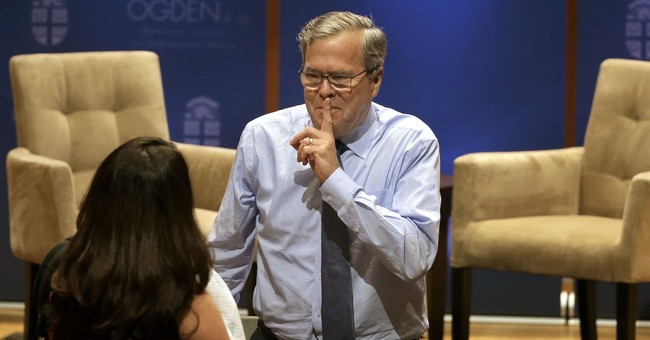 Jeb Bush has returned to brighten your Labor Day weekend with a message: It’s time for Republicans to take “action” on climate change.

Yes, with everything that’s going on right now, including the country being led off a cliff by Joe Biden, 2016’s low-energy candidate has his finger on the pulse. Inflation, American hostages in Afghanistan, the border crisis, etc. pale in comparison to the urgent need to tax carbon and spend more money we don’t have on useless green energy projects.

But it’s not just the message that’s dumb. It’s also the presentation. Bush decided to play off his infamous “please clap” moment and it’s hilarious in a “laughing at you, not with you” kind of way.

So I have some thoughts on this.

To start, the fact that Bush is trying to be awkward and funny here doesn’t make it any less cringe in presentation. Some people can make fun of themselves and come out looking cooler on the other end. Jeb Bush is not one of those people. Instead, I’m left being reminded what a bullet the country dodged when he flopped during the 2016 Republican primary. This man was never ready for primetime.

Regardless, and more importantly, what exactly does taking action on climate change look like? We are seeing this message come from more and more Republicans, but it always comes with a healthy covering of vagueness. As far as I can tell, Bush supports a carbon tax and wants to “invest” in “infrastructure” to fight global warming. That makes him decidedly liberal on the issue, but how far he’s truly willing to go is a bit of a mystery.

Yet, as a question of politics, his positioning is just stupid and nonsensical. Imagine thinking now is the time to hand the left a victory on one of its key issues. Further, the United States continues to cut its emissions without overbearing taxes or more deficit spending. The problem remains in Asia, with China and India doing the opposite. Europe has also largely flat-lined despite all their virtue signaling on the issue.

In short, many Americans are not up for self-inflicted pain if it won’t even make a statistical difference in solving the problem that supposedly exists, at least according to Bush and his Democrat allies.

Any discussion of climate change, and that’s assuming one even agrees it’s a problem (humanity has adapted its entire existence, after all), should be in the context of what will actually make a difference, not just what will make people feel better about themselves. Bush, despite being a proponent of action on climate change for years, has yet to really show how his proposals will accomplish anything. That’s a problem many Republicans have shared regarding a variety of issues.