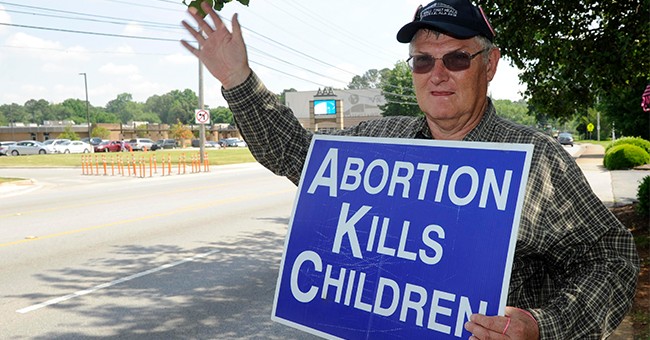 Setting aside the incongruent irony, as suggested by my headline, a growing number of “pro-choice” (pro-abortion) churches in Texas are vowing to fight the Lone Star State’s new fetal heartbeat law, which prohibits performing abortion procedures after a fetal heartbeat is detected.

Let’s first review what the law is and what it is not, via The Heritage Foundation:

The Texas law prohibits most abortions after a fetal heartbeat can be detected via ultrasound, which is at roughly six weeks gestation. It also prohibits individuals from assisting a person in obtaining an illegal abortion.

These so-called heartbeat bills have passed in various states in recent years, but all have been blocked by courts that have deemed them to run afoul of precedent established by Roe v. Wade and subsequent Supreme Court jurisprudence.

But the Texas Heartbeat Act takes a novel approach. Specifically, state officials may not enforce the law and are granted sovereign immunity against anyone seeking to bring suit on the grounds that the bill is contrary to constitutional law.

Instead, private citizens may bring a civil enforcement action against someone who performs an abortion in violation of the law or assists someone in obtaining an illegal abortion.

Therefore, the only way for an abortion provider to claim a defense against application of the law is to wait for a private actor to sue, and then raise their contrary argument that the law itself is unconstitutional.

The churches, which refer to themselves as “Reproductive Freedom Congregations” [rolling-eyes emoji], are united in their public support for a woman’s right to an abortion and are determined to “take God back” from the religious right, as reported by The Washington Post.

The initiative was spearheaded last week by the religious group “Just Texas: Faith Voices for Reproductive Justice” with the goal of “training” pastors on how to preach on “reproductive health” issues from the pulpit.

More than two dozen Texas congregations have publicly declared their support for women to decide whether and when to have children and have asserted that access to “reproductive health care” — an “essential healthcare service,” as self-proclaimed “devout Catholic” Joe Biden calls it — is a human right.

During a press conference last week, Just Texas announced that 25 churches had achieved the Reproductive Freedom Congregations designation since the effort launched in 2016. About 70 other churches that have agreed to hold the designation are “going through the process.”

According to the group’s website, to become a “Reproductive Freedom Congregation,” a church must publicly affirm three “principles”:

We trust and respect women.
We promise that people who attend our congregation will be free from stigma, shame, or judgment for their reproductive decisions, including abortion.
We believe access to comprehensive and affordable reproductive health services is a moral and social good.

Rev. Erika Forbes, outreach and faith manager of Just Texas, called the group “a historic moment,” as transcribed by WaPo:

This is a historic moment. Given the state of politics and policy and culture in the state of Texas, it’s a moment worth noting because it represents a transformation.

From what to what, exactly?

Even though we know that statistically speaking, church membership is down, data show that people go to their church or look to the church of their childhood upbringing to help them frame their moral decisions.

Churches are responsible for the direction of the culture in their community, in their state and in this country.

We need, right now more than ever, churches to come out of the shadows.

OK, not to nitpick, but are you sure you don’t mean some people in some churches need to, as you call it, come out of the shadows? Never mind — rhetorical question.

And this, from Forbes:

I am on a quest, we are on a quest, to take God back from the hostage situation that the conservatives have hijacked, and I absolutely feel that the God that I believe in, the God that I serve, called by many names, and no name at all, trusts and respects women.

And course we have Biden and Pelosi to kick around.

While I’m far from a theologian and I’m sure God “trusts and respects women,” Archbishop Joseph Naumann of Kansas City in March admonished Biden to “stop defining himself as a devout Catholic” and acknowledge that his views on abortion are not in line with the Church’s teaching.

And while we’re at it, Speaker Nancy Pelosi’s archbishop, Rev. Salvatore J. Cordileone, in May said “prominent Catholics” who support abortion should be denied communion. Pelosi has a long history of trotting out her “deep Catholic faith” at precisely the right moments — solely for political expediency. The classic example, her reference to late-term abortion as “sacred ground.”

As to pro-abortion churches in Texas “taking God back” from pro-life churches, Rev. Dr. Colin Bossen, senior minister of the First Unitarian Universalist Church of Houston, told KRIV-TV on Sunday that his church and other “Reproductive Freedom Congregations” represent mainstream Christians.

There are progressive liberal mainstream churches that are synagogues and mosques and temples that are out there and believe in reproductive freedom for women. We’re going to make our voices known.”

“Straight out of the fascist playbook,” according to the “man of God.”