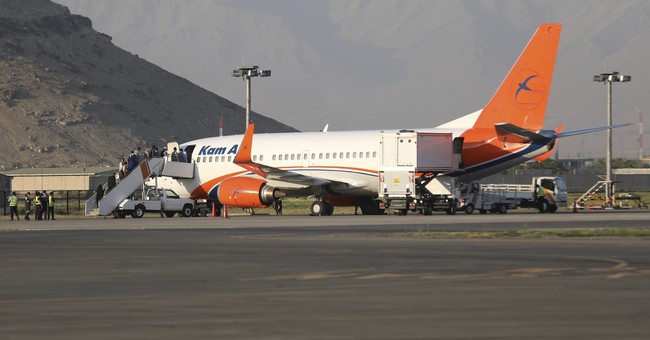 We previously reported on several planes being held up in Mazar-i-Sharif by the Taliban. 19 Americans and hundreds of Afghans were supposed to fly out on the flights. Rep. Michael McCaul (R-TX) characterized it as a hostage situation, indicating that the Taliban were trying to get things from the United States before letting the flights leave. The stalemate has already been going on for about six days. The people are not on the planes but are staying near the airport waiting to leave.

But now there are new reports on the continuing story.

One is that it isn’t just 19 Americans, but that there are at least 142 Americans as well as hundreds of SIVs across the multiple chartered flights, according to Newsweek. Six of the flights were chartered by a charity associated with Glenn Beck and three others by other entities.

That means that the Biden administration’s assessment of how many Americans are currently stranded in Afghanistan is far more than the 100 they were talking about just yesterday. It was clear from the outset that they had no idea how many Americans there were outside of the Kabul area. So obviously they weren’t in contact with “all” of them, as Ron Klain claimed yesterday.

NGO officials on the ground aren’t characterizing it as a hostage situation, although it’s hard to know what else to call it if the Taliban aren’t letting the planes leave and are asking for things in order to let them leave.

The State Department issued a silly statement, “We do not have personnel on the ground, we do not have air assets in the country, we do not control the airspace–whether over Afghanistan or elsewhere in the region,” the spokesperson said, adding that it remains “prepared to help.”

But the reports further indicate that this situation was exacerbated by the State Department and their failure to quickly act to help get the planes out of there.

Reuters reported that the delay had been caused by Biden administration officials not telling Taliban leaders it had approved the departures of the chartered flights from an airport in the city of Mazar-i-Sharif, 260 miles north of Afghan capital Kabul.

An exasperated flight organizer hit out at the State Department over the fiasco, saying: ‘They need to be held accountable for putting these people’s lives in danger.’ [….]

Two other organizers have also torn into the Anthony Blinken-headed department, with one – who didn’t give their name – telling Fox: ‘This is zero place to be negotiating with American lives. Those are our people standing on the tarmac and all it takes is a f****ing phone call.

‘If one life is lost as a result of this, the blood is on the White House’s hands. The blood is on their hands. It is not the Taliban that is holding this up – as much as it sickens me to say that – it is the United States government.’

One of those organizers also claimed that any rescue charter flights wishing to land at Al Udeid Air Base in Doha, Qatar, must first seek State Department approval, leaving them with a further bureaucratic delay.

Secretary of State Antony Blinken reportedly flew to Qatar to talk to leaders there to see if the situation could be resolved.

What we’ve seen again and again with the Biden Administration: For supposedly being the “adults,” they are just some of the most inept people on virtually all the issues that they are supposed to be dealing with. Now, that ineptness and failure to act have left hundreds of people in deep peril, once again.