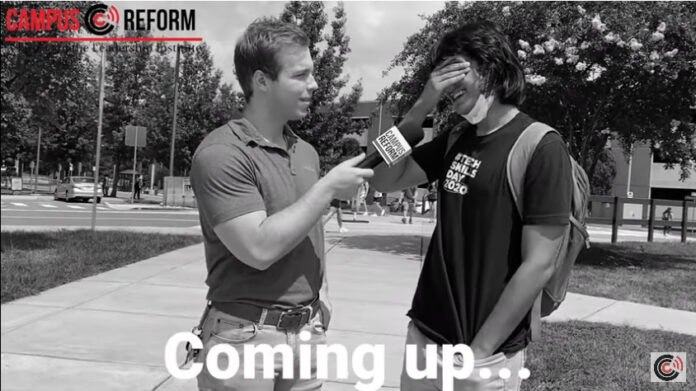 Students from George Mason University were recently asked for their current feelings about Joe Biden. This is a funny clip because you would think that Biden would still have support in these types of circles. Young liberals are usually more willing to go along with whatever he has to say, as long as they can remain supportive of Democrats.

These are the same young voters who think that saying “vote blue, no matter who” is a viable strategy. These students were once in Biden’s corner but now they feel differently about things. The Afghanistan disaster has a way of changing hearts and minds about this sort of stuff. As it turns out, the liberals aren’t quite as dumb as Biden was hoping for.

Better go back to the drawing board, Joe! The botched withdrawal is not the only aspect of this presidency that these students have an issue with. If anything, this video is restoring our faith in the students that are currently attending college in this country. From the looks of it, they are not going to fall for the Biden lies as easily as we would have thought.

It only took him a few months to start losing his death grip on these younger voters. These are the voters who are now more likely to sit home the next time around. The escalating inflation issue is causing them to become concerned and so is the situation at the border. These college kids are more informed than Biden will ever be willing to give them credit for.

Campus Reform arrived at the George Mason University campus, in hopes of finding out more about how these students really feel. The results were surprising to us but in retrospect? Maybe they should not have been. Addison Smith, a reporter for Campus Reform, said that many of the students wanted him to withdraw from Afghanistan.

Their issue is not the withdrawal itself. Their issue is that Biden went about it in the worst possible way. This seems like a pretty reasonable take to have but no one tell that to Biden. He still seems to think that anyone who has a problem with this is the wrong one. He should be listening to what his voters have to say. “It’s been a bit of a disaster,” said one of the students.

That’s an understatement. Other students were annoyed with the fact that he left billions in military equipment behind, allowing it to fall into the hands of the Taliban. “Basically, 20 years of work was just erased really quickly,” the student added, before going on to say that “some steps could have been taken by [Biden] to stop it.” We agree with them, 1000 percent!

All they are doing is correctly noting the facts, as they see them. “Promises kept? Biden has ‘failed a lot on his promises,’” said another student and they were not the only one. “On some things, he didn’t keep his promises on,” another continued. “I feel like those are his two main weaknesses: Afghanistan and the border,” the campus reporter was told. It’s like they are mirroring our daily statements at this point.

Last but not least, the students did not seem too keen on voting for Biden again in 2024. “I’d like to see who else is running,” one unconvinced student opined. That says it all, doesn’t it? If you take away his “but I’m not Trump!” card, what else is there? The college kids are one of the only groups that was willing to believe the nonsense that he was peddling. Without them, his house back to the White House is a tough one.