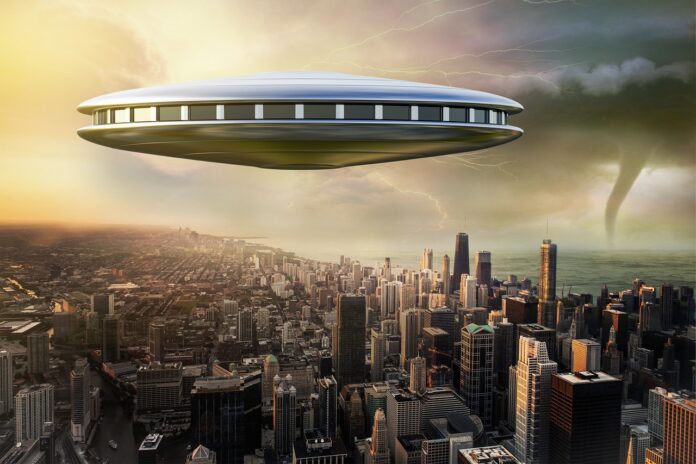 It turns out that illegal aliens aren’t the only aliens that the U.S. has to worry about these days.

The number of UFO sightings by what is deemed as “reliable” sources has been on the rise. Navy fighter pilots have reported sightings for quite a few years. Now, an American Airlines pilot called in a sighting while flying from Cincinnati to Phoenix.

The pilot of flight 2292 explained a close encounter with an object that went right over the plane. He said that it was a “long, cylindrical object” that looked kind of like a cruise missile.

Pilots, whether commercial or military, are concerned to be reliable sources for UFO sightings. The reason for this is that they are already in the air. They have the training to understand the various objects that can take flight. Plus, they have access to an incredible amount of technology to rule out various things.

What is it that the American Airlines pilot saw?

Considering that the object was spotted over New Mexico, there was speculation that it was a missile from the White Sands Missile Range.

The transmission from the pilot was confirmed as coming from flight 2202. The FAA has been made aware of the sighting and so has the FBI.

Scott Stearns, a spokesperson for the White Sands Missile Range, has identified that there were no tests conducted on the day of flight 2292. Additionally, he said that tests are never conducted in that area.

Lally Laksbergs, a spokesperson for the Kirtland Air Force Base in nearby Albuquerque confirmed that they have no knowledge of anything that would have been up in the air during that time, either.

So, what is it that the American Airlines pilot saw? It could not have been a missile. The Air Force had not launched anything. And, as the pilot saw, the object was flying very fast and flew directly above the plane. This means that it was not another plane though it had the ability to fly over the plane as opposed to crashing into it.

Steve Douglass, a “stealth chaser” out of Amarillo that runs the blog “Deep Black Horizon” discussed the incident in greater detail. He had the recording of the pilot’s transmission. He also noted that there was no reply from air traffic control.

Considering that the military has to report all activity to the FAA and neither the military nor the FAA has any knowledge of anything being in the air, it begs the question: what was it?

There may very well be intelligent life coming in from other planets. Just as the U.S. sent a new rover to Mars, perhaps there are other planets sending rovers to check on us. It can report back on all of the stupid things that we’re doing as a race. All they have to do is listen to one speech given by our president and they’ll decide they don’t want anything to do with us.

The real question is whether the various UFO sightings are really from another planet. Once they’ve sent in enough to check on us, when will they plan on landing and asking for an introduction?

It may not be long before we have to deal with aliens and illegal aliens. And if the aliens can speak English, the liberals may decide to start giving them rights, too. Hey, it could be the extra votes they’ve been searching for. If the aliens decide they want to vote Democrat, the GOP may lose their lead forever.

That is, unless, the aliens are Trump supporters. Perhaps the riot on January 6 encouraged them to fly out a ship and see what’s really going on.

The only thing we know for sure is that the American Airlines pilot didn’t see a missile. If it was a UFO, there were no reports that it crashed. So, now we wait until another UFO is spotted to see if there’s any rhyme or reason for the uptick in activity.