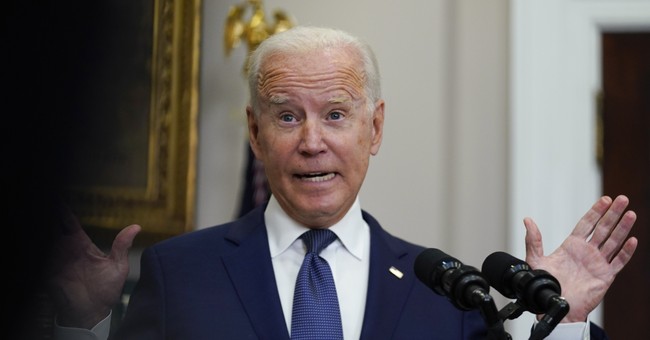 Why can’t Joe Biden stop lying? That was my thought when I saw that the president had once again completely made up his attendance at a past event, this time while hosting a group of Jewish leaders.

According to Biden via a bumbling, confusing claim, he visited the Tree of Life synagogue following a mass shooting that occurred there some years ago.

Biden had not, in fact, visited the Tree of Life synagogue. Further, the president has told that lie several times, yet he keeps repeating it. That tracks with other whoppers, such as his claim that he was part of the Civil Rights movement in Delaware, or that he was arrested in South Africa. More recently, he claimed to have driven an 18-wheeler in his younger years, something that decidedly did not happen.

Biden, for all the claims that his administration represented a return to honesty (“how refreshing” as Brian Stelter would say), has shown himself to be a consistent fount of dishonest commentary, and he often lies about the dumbest things. Does anyone really believe he gave “Corn Pop” a good talking to at the city pool?

But Biden’s lies don’t just stop at the mundane and stupid. Right now, Americans are trapped in Afghanistan, because the president lied when he said he’d leave troops in the country until every American who wanted to get out could get out. He also lied about there being no intelligence saying that the Taliban could quickly take over the country. And of course, we can’t forget that he lied and continues to lie about how his first wife and child died, repeatedly blaming a man who was not actually at fault for the accident.

Biden is a lying liar who lies. But why?

When people began to note that he was lying about visiting the Tree of Life synagogue, the most common retort was that he simply forgot. You see, according to Biden’s defenders, he talked to a rabbi on the phone at one point after the shooting, so that must have been what he meant. Yet, is it really a good look for the President of the United States to be forgetting basic things like where he went and where he didn’t? It’s almost like being able to remember basic things is a normal prerequisite for the job.

I don’t buy that it’s just his mental decline, though. Biden has been lying his whole career, and while I’m more than happy to blame much of his incoherence on his senility and probable dementia, I think he knows exactly what he’s doing — because Biden is a classic BS artist. We’ve all known someone like him. Someone who has been everywhere and done everything, or so they claim. He’s Brian Williams, except he’s a politician instead of a news anchor.

In other words, the lies are intentional and should be treated as such. The only reason we don’t hear more about their aggregation is that the “fact-checkers” have refused to keep track of Biden’s lies the way they did with Trump. While Glenn Kessler, The Washington Post’s fact-checker guy, still touts his “Trump lied 30,000 times” claim, he’s completely refused to keep such a record on the current president. To do so would be to admit that Biden is the most dishonest hack to ever inhabit the White House, and we can’t have that.

Regardless, while Biden’s lies may be intentional, I don’t want to downplay the senility. Whatever you want to blame the falsities on, it makes him unfit for office. And the country has over three years of this left to go. It’s a sad scene.