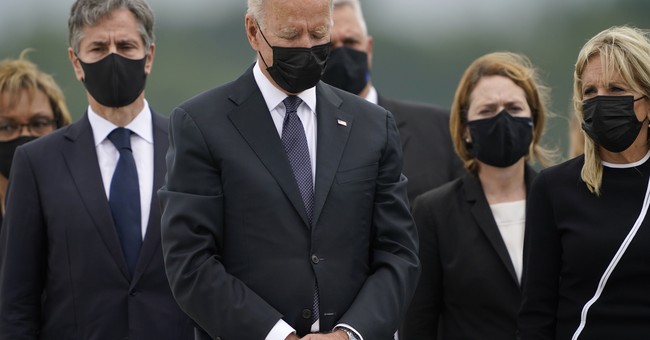 We reported earlier on the astounding “fact check” by the USA Today fact-checker and the subsequent “correction” on the issue of Joe Biden checking his watch at the Dover Air Base dignified transfer ceremony.

The fact-checker, Daniel Funke, seemed invested in trying to disprove the claims that Biden checked his watch during the ceremony. The claims came from multiple sources, including from Gold Star families who were actually at the ceremony and saw what Biden did.

But it wasn’t misleading. Funke called it misleading based upon his conclusion that Biden checked the watch toward the end of the ceremony.

First, claiming it was toward the end of the ceremony is a pretty lame excuse to call the claim wrong. If it happened at the end, it still happened. Of course, the problem with this was that Biden checked it repeatedly during the ceremony, according to some of the families.

USA Today later conceded this and corrected it to now say that the claim he checked his watch was “missing context.”

What was the “missing context?” That you were wrong completely? That you wanted to find some why to cover for Biden? What a fact check! The claim was obviously true.

But Funke received so much backlash for the ridiculous fact check that today he spoke out on Twitter.

Yes, everyone does make mistakes.

It wouldn’t have taken more than a few minutes to have figured out that it was wrong, from the beginning. The fact that he didn’t was because he had a preconceived notion about where he wanted to go. So the actual facts were unimportant, even if meant he was implicitly attacking what Gold Star families said in the process.

So who’s the victim here to Funke? He is. Not the people — including the Gold Star families — whose remarks he besmirched.

Let’s also fact-check that claim that it’s easy to dunk on him. Not so much, at least not to his face, since he limits those who can respond to him. So, no, it isn’t.

He really didn’t want to hear what people had to say if he’s limiting those who can respond. That’s a bad tactic for someone who claims to care about facts. A little too late to try to clean it up now.