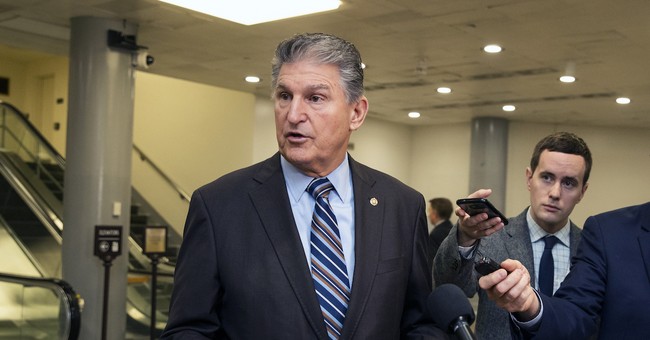 I’ve often been hard on Sen. Joe Manchin and for good reason. Too often in the past, he’s presented himself as an unshakable moderate in order to keep his seat in deep-red West Virginia, while at the same time folding on major issues when he gets to Washington.

Yet, I have to give him credit. Under immense pressure from the far-left of his party, including the leadership in Chuck Schumer and Nancy Pelosi, Manchin appears to be stiffening his spine. I’m not saying to trust him just yet, but it’s a good sign.

Today, Manchin penned an op-ed in The Wall Street Journal announcing that he’s not going to go along with the massive, irresponsible, freedom-crushing, $3.5 trillion reconciliation budget proposed by the Democrats. Instead, he’s urging a pause in order to pare things down.

The nation faces an unprecedented array of challenges and will inevitably encounter additional crises in the future. Yet some in Congress have a strange belief there is an infinite supply of money to deal with any current or future crisis, and that spending trillions upon trillions will have no negative consequence for the future. I disagree.

An overheating economy has imposed a costly “inflation tax” on every middle- and working-class American. At $28.7 trillion and growing, the nation’s debt has reached record levels. Over the past 18 months, we’ve spent more than $5 trillion responding to the coronavirus pandemic. Now Democratic congressional leaders propose to pass the largest single spending bill in history with no regard to rising inflation, crippling debt or the inevitability of future crises. Ignoring the fiscal consequences of our policy choices will create a disastrous future for the next generation of Americans.

To be sure, there’s some weasel language in there, but I think Manchin’s use of the inflation issue, which is a major, middle-class crushing problem, is strategic. He knows his party has no answer to his concerns so he can challenge them without worry, and that gives him the reasoning he needs to stand firm. Remember, this is a senator from West Virginia who has indicated he might want to run for governor again one day. Manchin has nothing to gain and everything to lose by folding to his left flank.

It also doesn’t appear that he’ll be standing alone, as Sen. Kyrsten Sinema continues to down the reconciliation bill as well. While Manchin is at least trying to appease his party with reasoned argument, Sinema continues to just do whatever the heck she wants, and it drives her left-wing detractors insane.

All of this has the far-left reeling and flailing desperately in an attempt to find a way to punish Manchin.

As a Republican, nothing would make me happier than to see Schumer and the Democrat leadership go scorched earth on Manchin. But I think they realize they don’t hold those cards, and to act as if they do would just end in Manchin switching parties, handing the Senate back over to the GOP.

That is the issue for the far-left. They want to govern as a super-majority, but they have nowhere near the numbers necessary to do so. All the Alexandria Ocasio-Cortez mean tweets in the world won’t change that. The frustration is palpable, but Manchin has no reason to throw them a bone. The smart play would be to butter him up and try to extract as much out of him as possible. Yet, no one ever accused the far-left of being smart so they are whining on Twitter instead. That’s good news for fiscal conservatives, as it likely pushes Manchin further into his corner.

In the end, I’m sure Manchin will agree to some level of spending that is largely objectionable to most Republicans. But when you don’t have a majority, you have to take the wins where you can get them. It would be a major win if Manchin succeeded in lessening the damager here. Let’s hope he holds the line.